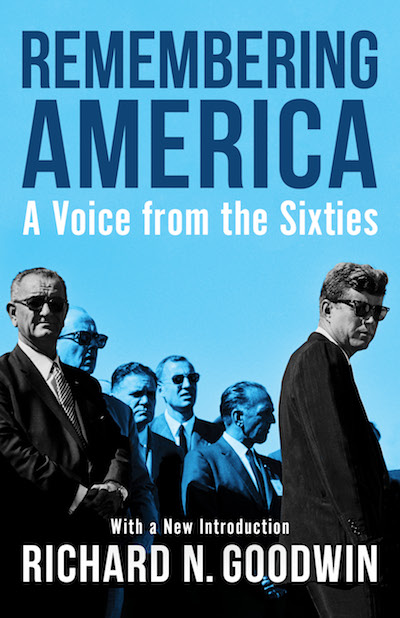 Published by Open Road Media
From the speechwriter and top adviser to presidents Kennedy and Johnson: A behind-the-scenes history of the most momentous decade in American politics.

Richard N. Goodwin entered public service in 1958 as a law clerk for Supreme Court Associate Justice Felix Frankfurter. He left politics ten years later in the aftermath of Senator Robert F. Kennedy’s assassination. Over the course of one extraordinary decade, Goodwin orchestrated some of the noblest achievements in the history of the US government and bore witness to two of its greatest tragedies. His eloquent and inspirational memoir is one of the most captivating chronicles of those turbulent years ever published.

From the Twenty-One quiz-show scandal to the heady days of John F. Kennedy’s presidential campaign to President Lyndon Johnson’s heroic vote wrangling on behalf of civil rights legislation, Remembering America brings to life the most fascinating figures and events of the era. As a member of the Kennedy administration, Goodwin charted a new course for US relations with Latin America and met in secret with Che Guevara in Uruguay. He wrote Johnson’s historic civil rights speech, “We Shall Overcome,” in support of the Voting Rights Act of 1965 and formulated the concept of the Great Society and its programs, which sought to eradicate poverty and racial injustice. After breaking with Johnson over the president’s commitment to the Vietnam War, Goodwin played a pivotal role in bringing antiwar candidate Eugene McCarthy to within a few hundred votes of victory in the 1968 New Hampshire primary. Three months later, he was with his good friend Robert F. Kennedy in Los Angeles the night that the young senator’s life—and the progressive movement that had rapidly brought about such significant change—came to a devastating end.

Throughout this critical decade, Goodwin held steadfast to the passions and principles that had first led him to public service. Remembering America is a thrilling account of the breathtaking victories and heartbreaking disappointments of the 1960s, and a rousing call to action for readers committed to justice today.