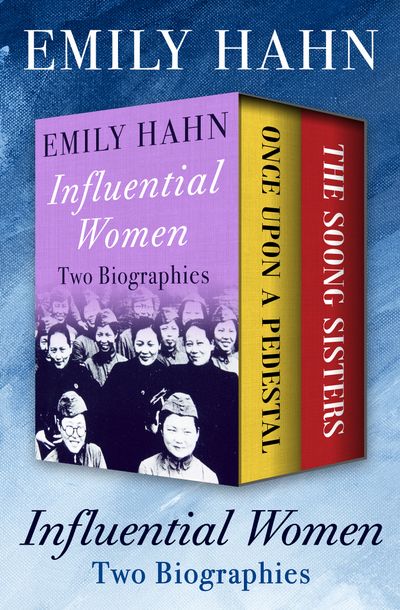 Published by Open Road Media
Portraits of pivotal American feminists and three of the most powerful women in twentieth-century China by the “quintessential New Yorker narrator” (The New York Times).

Once Upon a Pedestal: After living an unconventional and exotic life for decades, New Yorker writer Emily Hahn was in her late sixties when this book was first published in 1974. As the Women’s Movement continued to gain momentum, Hahn penned this “essential history of the remarkable women who led the feminist movement in America.” Her “excellent and eminently readable” biographical sketches include Susan B. Anthony, Clara Barton, Fanny Wright, the Grimké sisters, Margaret Sanger, Jane Addams, Victoria Woodhull, Harriet Martineau, Eleanor Roosevelt, and Betty Friedan (Publishers Weekly).

“[The] quintessential New Yorker narrator whose adventures over the last forty years have intrigued, amused and educated . . . Emily Hahn is, herself, a role model. It is fitting and felicitous for her to give us an armchair guide to strong-minded American women.” —The New York Times

The Soong Sisters: In 1935, intrepid journalist and fearless feminist Emily Hahn traveled to China and sent dispatches to the New Yorker. Through her lover, the Chinese poet Shao Xunmei, she met and established close bonds with three of the most instrumental women in twentieth-century Chinese history, who happened to be sisters. The Soong family was arguably the most influential family in Shanghai, even more so as eldest sister Eling married finance minister H. H. Kung; middle sister Chingling married Sun Yat-Sen, the founding father and first president of the Republic of China; and youngest sister Mayling married Chiang Kai-Shek, who succeeded Sun as the leader of the Republic of China. Hahn’s chronicle of the family’s history, written while bombs were falling during the Second Sino-Japanese War, and published in 1941, while Hahn was still in Japanese-occupied Hong Kong, is a vivid, comprehensive, and uniquely personal account of the sisters who would become known to the world as Madame Kung, Madame Sun, and Madame Chiang Kai-Shek.

“First rate reportorial job on three distinguished women . . . [a] tribute to their work and their individual heroisms.” —Kirkus Reviews