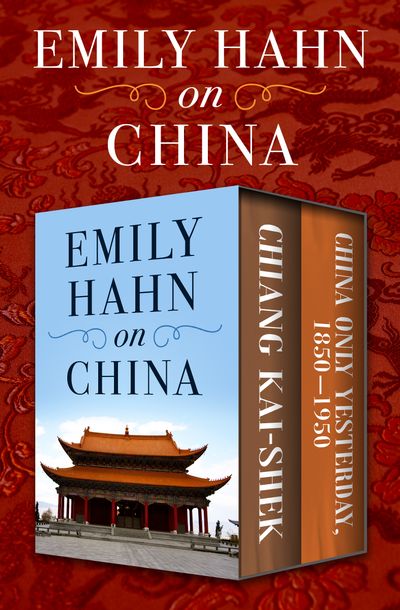 Published by Open Road Media
Chinese history is brought to vivid life by the “quintessential New Yorker narrator” and author of The Soong Sisters, who lived in China from 1935 to 1941 (The New York Times).

Chiang Kai-Shek: As the head of the Nationalist Party, Chiang led the Republic of China for over two decades from 1927 through the Japanese invasion, World War II, and the civil war that ended with a Communist victory in 1949. After defeat, he retreated with his government to Taiwan, where he continued to lead as president of the exiled Republic of China.

Published in 1955, this in-depth biography by legendary New Yorker writer Emily Hahn examines Chiang’s childhood in southern China, his relationship with revolutionary Sun Yat-Sen, his rise to power, and his battles with the Japanese Imperial Army and Communist forces led by Mao Zedong, as well as chronicling his marriage to the glamorous, American-educated Soong May-ling (the youngest of the influential siblings portrayed in Hahn’s The Soong Sisters), who converted her husband to Christianity and helped him enact social reforms. Casting a critical eye on Sino-American relations, Hahn sheds new light on a complex leader, who was one of the most important global political figures of the last century.

“[Hahn] writes . . . with an impassioned warmth . . . colorful reading . . . An irreparable past is echoed in the forlorn note sounded here.” —Kirkus Reviews

China Only Yesterday, 1850–1950: With an insider’s knowledge of Chinese culture and politics, Hahn delivers a sharply observant book that illuminates a century of China’s tumultuous history. Her “absorbing” history begins with the Treaty of Nanking, which gave Western powers access to five of China’s eastern ports, and covers the British colonization of Hong Kong, the rise of the tea trade, the Opium Wars, the arrival of Christian missionaries, the Boxer Rebellion, the revolutionary movement led by Sun Yat-Sen, the overthrow of the Ch’ing Dynasty, the escalating tensions between the Communist and Nationalist parties, and the Japanese invasion on the eve of World War II—which Hahn experienced firsthand (Kirkus Reviews). The final chapters cover the civil war, which ended with Chairman Mao’s formation of the People’s Republic of China and Chiang Kai-shek’s retreat to Taiwan.