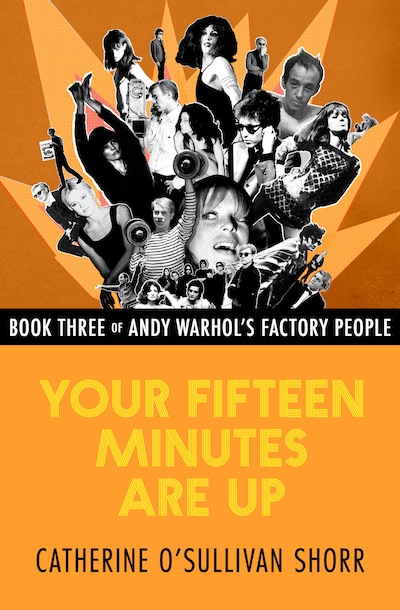 Your Fifteen Minutes Are Up

The late 1960s brought seismic shifts to Andy Warhol and life at the Silver Factory. The hub of his avant-garde scene shifted from the Factory on Manhattan’s 47th Street to the downtown bar Max’s Kansas City; new stars like drag queens Jackie Curtis, Holly Woodlawn, and Candy Darling began to replace Warhol’s old favorites; and a shocking act of violence left him paranoid and mistrusting of even his closest friends. Told by the actors, artists, writers, and hangers-on who populated and defined the Factory, Your Fifteen Minutes Are Up is an unprecedented exposé of these tumultuous times.

By 1967, it seemed to many that the Factory had outlived its 15 minutes of fame. Superstars like Edie Sedgwick, who had reached the height of fame only the year before, were now running out of money and falling victim to drug addiction. Some Factory dwellers had falling-outs with Warhol, while others, like Lou Reed and John Cale of the Velvet Underground, got caught up in disputes of their own. When radical feminist Valerie Solanas shot and nearly killed Warhol, the artist had already relocated to the White Factory in Union Square, leading to further rifts within the group. Intimate interviews with scene insiders and candid photos from Billy Name portray the true stories behind the legends and mystique of the Silver Factory.