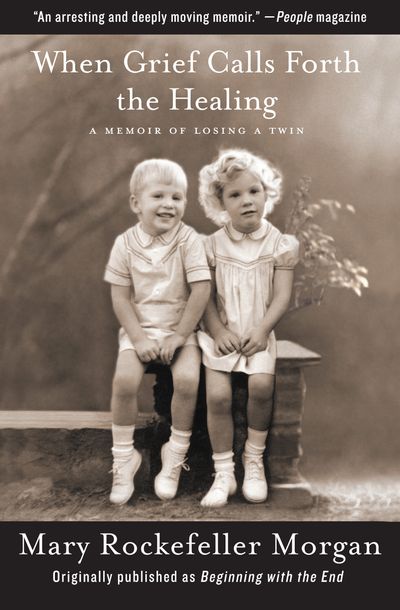 When Grief Calls Forth the Healing

Published by Open Road Media
In 1961, Michael Rockefeller, son of then-governor of New York State Nelson A. Rockefeller, mysteriously disappeared off the remote coast of southern New Guinea. Amid the glare of international public interest, the governor, along with his daughter Mary, Michael’s twin, set off on a futile search, only to return empty handed and empty hearted. What followed were Mary’s twenty-seven-year repression of her grief and an unconscious denial of her twin’s death, which haunted her relationships and controlled her life.

In this startlingly frank and moving memoir, Mary R. Morgan struggles to claim an individual identity, which enables her to face Michael’s death and the huge loss it engendered. With remarkable honesty, she shares her spiritually evocative healing journey and her story of moving forward into a life of new beginnings and meaning, especially in her work with others who have lost a twin.

“The sea change began one November day in 1961. I remember the moment before. A window in the corner of my parents’ living room drew my attention. A windblown branch from an azalea bush scratched the surface of the glass, making a discordant sound. My father stands out clearly, his figure powerful and solid next to the soft, down-pillowed sofa. By the window, my two brothers and I are clustered around my mother, wary, and watching him. It was barely two months since Father had separated from her. And just days before, he’d called a press conference, choosing to publicly expose his affair and his decision to remarry. Father held a yellow cablegram in his hand. Mike, my twin brother, was missing off the coast of New Guinea. Missing . . . The ‘s’ sound. Like a thin knife, it slipped deep inside me. No resistance, just a sharp, knowing pain and then shimmering silence.” —Adapted from Chapter One