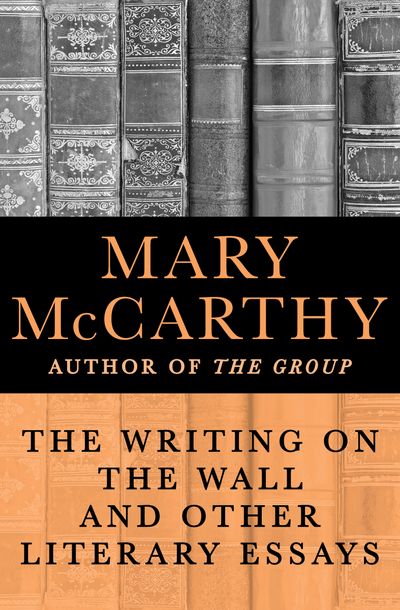 The Writing on the Wall

Published by Open Road Media
From Madame Bovary to Macbeth, this collection by Mary McCarthy offers surprising revelations about some of the world’s most beloved works
Shakespeare, Nabokov, Orwell, and Burroughs are just a few of the literary immortals featured in this engaging and thought-provoking volume.
In one remarkable essay, McCarthy provides a lively discourse on the true nature of evil in Shakespeare’s plays. Focusing on the character of Macbeth, she reveals why Lady Macbeth, who has to “unsex herself” and “wear the pants,” is the more human of the two. She tells us why the often-overlooked character of Madame Bovary’s husband, Charles, is the true hero, and not Emma Bovary, whom Flaubert once famously said was himself. Also included here is McCarthy’s impassioned defense of Hannah Arendt’s controversial book Eichmann in Jerusalem, as well as a discussion of the reactionary leftist writers, and a look at why J. D. Salinger was the obvious successor to Hemingway.
Distinguished by McCarthy’s savage intelligence, clarity of thought, and utter lack of pretension, The Writing on the Wall is a timeless gem from an author who reveres the written word.
This ebook features an illustrated biography of Mary McCarthy including rare images from the author’s estate.