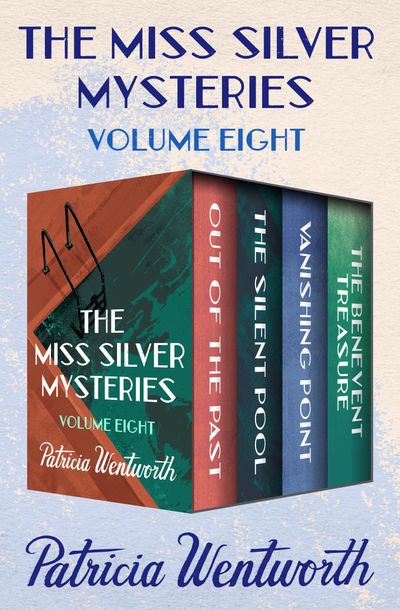 Retired governess and teacher Maud Silver has a new profession: private detective. And though she may seem a kindly and demure pensioner, she can solve crimes right alongside the best Scotland Yard has to offer in this charming series from “a first-rate storyteller” (The Daily Telegraph).

Out of the Past: Alan Field is a charming, handsome young man with a predilection for causing trouble and breaking hearts. But when he learns that an author is writing a biography of his late father, it’s up to Alan to go through his father’s letters—where he finds a bundle of scandalous correspondence and forms a plan. It begins as blackmail and ends with a dead body. And that’s where Miss Silver comes in.

The Silent Pool: Actress Adriana Ford is afraid—and with good reason. Someone is trying to kill her. So she goes to Miss Silver for help finding out who wants her dead. It could be anyone: a stalker, an obsessed fan, even her own family. Then, a body is found at Adriana’s estate, and Miss Silver travels to the countryside where she learns that Adriana may not have been telling her the whole truth—and that the truth may get her killed.

Vanishing Point: Jenny Maxwell is a bright, young disabled child who writes stories of fantasy. But they are only barely fictional. Trapped in her room for hours at a time, Jenny hears all. She knows about the young woman who disappeared from town, and about the strange young man who works at the nearby military research center. What sounds like harmless gossip could actually be a grave threat to national security—one which only Miss Silver is capable of unearthing.

Benevent Treasure: As a WWII orphan, Candida Sayle has never considered that she might have a family somewhere. Then she receives a letter from an unheard-of aunt, inviting Candida to rejoin the Benevent family. The young woman ventures to the country, and the environment comforts Candida—as do the attentions of her aunt’s handsome young secretary. But her vacation goes off the rails when death strikes the house, and the brilliant detective Maud Silver joins the party to investigate the possible murder.

These charming traditional British mysteries featuring the unstoppable Miss Silver—whose stout figure, fondness for Tennyson, and passion for knitting disguise a keen intellect and a knack for cracking even the toughest cases—are sure to delight readers of Agatha Christie, Ellis Peters, and Dorothy L. Sayers.