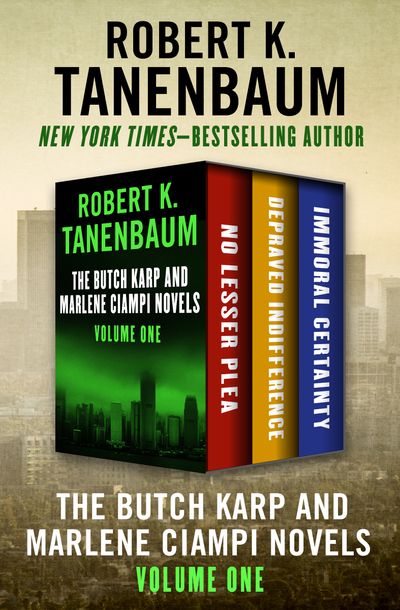 The Butch Karp and Marlene Ciampi Novels Volume One

Published by Open Road Media
From a New York Times–bestselling author and the “Joseph Wambaugh of the judicial system,” comes the first three legal thrillers in the long-running series (San Diego Tribune).

A successful trial lawyer and “one hell of a writer,” Robert Tanenbaum crafts his legal thrillers with authenticity and breath-taking suspense. In these first three books of the series, he introduces Manhattan assistant district attorney Roger “Butch” Karp, who struggles to remain true to himself in an often corrupt judicial system. But with the help of assistant DA Marlene Ciampi, he fights the good fight with energy, wit, and a passion for the truth (New York Post).

No Lesser Plea: A brutal murderer hopes feigning insanity will keep him out of the courtroom. But Butch and Marlene aren’t about to let him get away with it.

Depraved Indifference: Butch is ready to prosecute a group of Croatian terrorists in what should be a slam-dunk case, but everyone from the FBI to the CIA—and even the Catholic Church—is prepared to stop him.
“A novel full of whirlwind action . . . Very good.” —New York Times Book Review

Immoral Certainty: A remorseless monster is stalking the city’s children, forcing Butch and Marlene to descend into the darkest corners of New York’s underworld where a benign face can hide an evil soul.