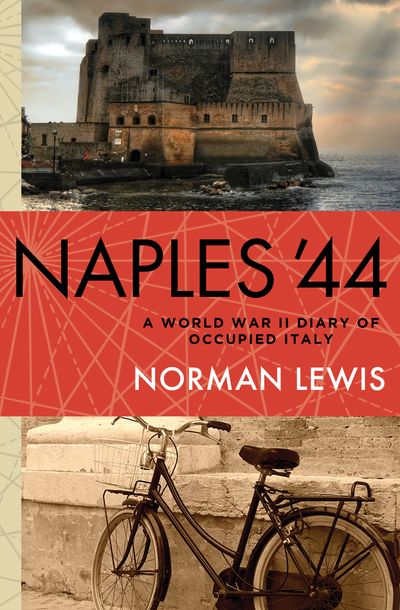 Published by Open Road Media
The basis for the powerful documentary narrated by Benedict Cumberbatch, Lewis’s memoir of the Italian city after Nazi occupation is a “masterpiece” (Will Self).

“Vivid, lucid, elegant, often funny,” Naples ’44 is the starkly human account of the true cost of war as seen through the eyes of a young, untested man who would never again look at his world the same way (The New York Times Book Review).

With his gift for linguistics, Norman Lewis was assigned to the British Intelligence Corps’ Field Security Service, tasked with reforming civil services, dealing with local leaders, and keeping the peace in places World War II had devastated.

After a near-disastrous Allied landing at Salerno, Italy, Lewis was stationed in the newly liberated city of Naples. But bringing the city back to life was unlike anything he had been prepared for. Much of the populace was far from grateful, stealing anything they could, not only from each other but also from those sent to help them. Local vendettas and endless feuds made discerning friend from Nazi collaborator practically impossible, and turned attempts at meting out justice into a farce. And as the deprivations grew ever harsher, a proud and vibrant people were forced to survive on a diet of prostitution, corruption, and a desperate belief in miracles, cures, and saviors.

But even through the darkness and chaos, Lewis evokes the essential dignity of the Neapolitan people, their traditions of civility, courage, and generosity of spirit, and the indefatigable pride that kept them fighting for life during the greatest calamity in human history.

Praised by Graham Greene as “one of the best writers . . . of our century,” Norman Lewis presents a portrait of Naples that is a “lyrical, ironic and detached account of the tempestuous, byzantine and opaque city in the aftermath of war” (Will Self). His Naples ’44 “reads like prose . . . sings like poetry” (The Plain Dealer).