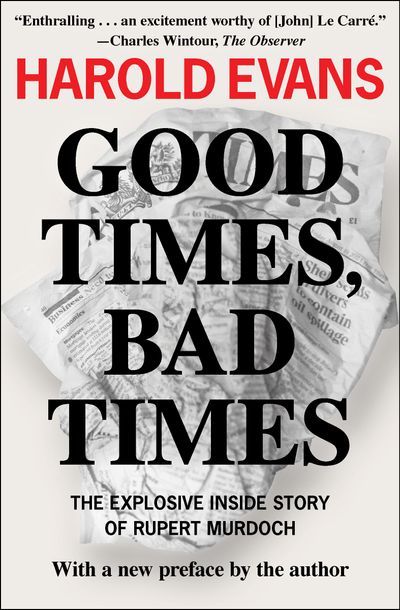 Published by Open Road Media
A renowned journalist’s “vivid” account of his battle with Murdoch after the global media baron bought the Times of London (Chicago Tribune).
In 1981, Harold Evans was the editor of one of Britain’s most prestigious publications, the Sunday Times, which had thrived under his watch. When Australian publishing baron Rupert Murdoch bought the daily Times of London, he persuaded Evans to become its editor with guarantees of editorial independence. But after a year of broken promises and conflict over the paper’s direction, Evans departed amid an international media firestorm. Evans’s story is a gripping, behind-the-scenes look at Murdoch’s ascension to global media magnate. It is Murdoch laid bare, an intimate account of a man using the power of his media empire for his own ends. Riveting, provocative, and insightful, Good Times, Bad Times is as relevant today as when it was first written.
With details on the scandalous deal between Murdoch and Margaret Thatcher, this updated ebook edition includes an extensive new preface by Evans, the New York Times–bestselling author of Do I Make Myself Clear?, discussing the Rupert Murdoch phone-hacking scandal.