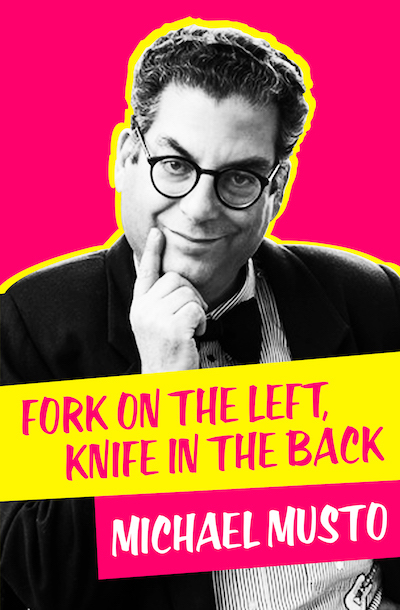 Fork on the Left, Knife in the Back

Published by Open Road Media
For over a quarter of a century, Michael Musto entertained the country with his column “La Dolce Musto” in the Village Voice; fabulous, funny, and flippant, this collection is an insider’s guide to the glittering highs and desperate lows of New York City’s more colorful residents

Hailed by the New York Times as “the city’s most punny, raunchy, and self-referential gossip columnist,” Michael Musto doled out wit and wisdom in his weekly Village Voice column for twenty-nine years. This waggish and wise book contains highlights from his published pieces as well as several original essays.

With his trademark slashing humor, Musto weighs in on everything from celebrities in need of counseling to cheap thrill–seeking and why weirdos are his heroes. No one is spared, including the self-proclaimed “King of Gossip” himself. His interviews and profiles of Paris Hilton, Sandra Bernhard, Crispin Glover, Kiki and Herb, Sarah Silverman, and other fringe celebrities are priceless, made all the more vivid by Musto’s extraordinary access. Catty, titillating, and endlessly enthralling, Fork on the Left, Knife in the Back is a feast for the senses—a must-have book for Musto devotees and fans of popular culture.

This ebook features an introduction by the author.