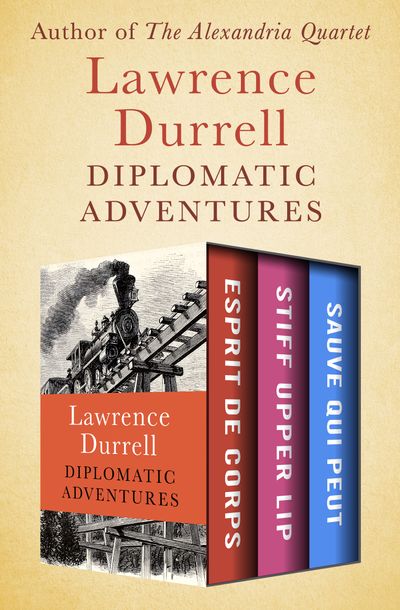 Published by Open Road Media
The complete Antrobus stories of diplomatic mischief comprise “a rewarding cocktail based on two parts Wodehouse and half a part of H. H. Munro” (The New York Times).

Versatile British novelist, travel writer, and member of the real-life family portrayed in the PBS Masterpiece production, The Durrells in Corfu, Lawrence Durrell worked in the Foreign Service during and after World War II, where he experienced the absurdities of international diplomacy firsthand.

Here are the complete misadventures of British diplomat Antrobus at his post in Vulgaria, behind the Iron Curtain, featuring delightful illustrations. “These tales of comic woe, small disasters, goofs, gaffes and misadventures from the ridiculous to the absurd depict the vaudeville of a government bureaucracy” (Publishers Weekly).

Esprit de Corps: After decades spent representing Britain around the globe, Antrobus has earned countless medals and the right to pass afternoons in his London club, musing over old times. Unfortunately, every old embarrassment still rankles—no matter how ridiculous. The incident with the Yugoslav ghost train, for instance, still causes him to clench his fists in fear. When he speaks of Sir Claud Polk-Mowbray, he takes pains to lower his voice—lest an American hear. And his stomach has never recovered from a potentially disastrous misprint: “THE BALKAN HERALD KEEPS THE BRITISH FLAG FRYING.”

“My goodness it is funny.” —The Daily Telegraph

Stiff Upper Lip: In “If Garlic Be the Food of Love,” the overseer of the kitchen at the British embassy in Vulgaria is flagrantly abusing his power. He has begun serving food with garlic! Does he mean to cripple international diplomacy with foul breath? No mere mint can save him now. After this initial taste, eight more stories make it abundantly clear why Antrobus nicknames his fellow diplomats “dips.”

“No person, place or thing can ever quite remain the same for us after we have seen, smelled, tasted, heard and felt it through the senses of Lawrence Durrell.” —Saturday Review

Sauve Qui Peut: In “What-ho on the Rialto!” a diplomatic incident begins brewing as soon as the lovely new French ambassador—or is it ambassadress?—arrives in Vulgaria. One of the British delegation is instantly besotted, and about to begin his pursuit when a rival appears in the form of roguish Italian diplomat Bonzo di Porco. As gentlemen, they settle their dispute rationally: with swords. Eight more sharp-witted examples of international relations follow.