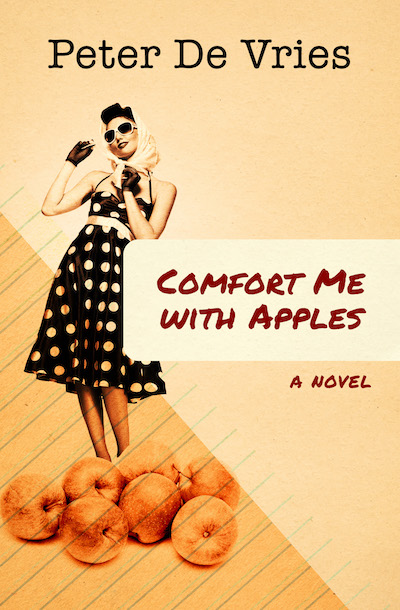 Comfort Me with Apples

Chick Swallow and his best friend, Nickie Sherman, are teenage boulevardiers of Decency, Connecticut, devotees of Oscar Wilde who spend their evenings crafting perverse aphorisms in an ice-cream parlor. “There is only one thing worse than not having children,” opines Chick, “and that is having them.” Unrepentant aesthetes, someday soon they will be in Paris or New York, far removed from the mainstream.

Then the unthinkable happens. Marriage. Family. Dinner parties. For Chick, a job at the local newspaper writing an advice column punctuated by blandly inspirational Pepigrams: “To turn stumbling blocks into stepping stones—pick up your feet.” For Nickie, an unlikely career in law enforcement. But just when it seems that their lives have settled down before they could even begin, Chick begins an affair with Mrs. Thicknesse, a newspaper music critic of ample girth and means, and a whole brouhaha breaks loose: blackmail, forgery, secret sleuthing, lawsuits. There is drama in suburbia after all, and Chick and Nickie are up to their necks in it.

A wild, witty tale of friendship, marriage, and infidelity, Comfort Me with Apples is full of the brilliant wordplay and delicious ironies that made Peter de Vries “one of the best comic novelists that America has ever produced” (Commentary).