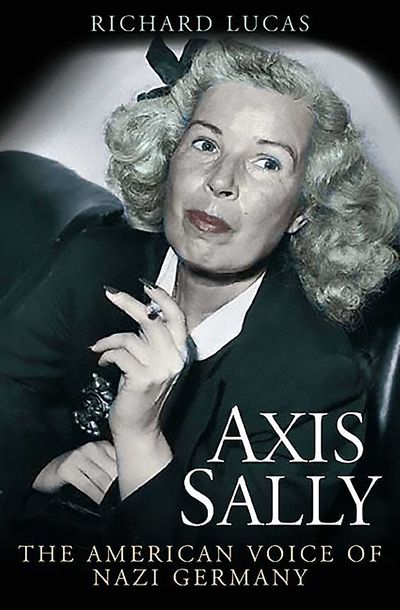 Published by Casemate Publishers
A “fascinating, well-researched account” of Mildred Gillars, the failed actress who turned on her country and became a Nazi propagandist during WWII (Publishers Weekly).

One of the most notorious Americans of the twentieth century was a failed Broadway actress turned radio announcer named Mildred Gillars (1900–1988), better known to American GIs as “Axis Sally.” Despite the richness of her life story, there has never been a full-length biography of the ambitious, star-struck Ohio girl who evolved into a reviled disseminator of Nazi propaganda. At the outbreak of war in September 1939, Gillars had been living in Germany for five years. Hoping to marry, she chose to remain in the Nazi-run state even as the last Americans departed for home. In 1940, she was hired by the German overseas radio, where she evolved from a simple disc jockey and announcer to a master propagandist. Under the tutelage of her married lover, Max Otto Koischwitz, Gillars became the personification of Nazi propaganda to the American GI. Spicing her broadcasts with music, Gillars’s used her soothing voice to taunt Allied troops about the supposed infidelities of their wives and girlfriends back home, as well as the horrible deaths they were likely to meet on the battlefield. Supported by German military intelligence, she was able to convey personal greetings to individual US units, creating an eerie foreboding among troops who realized the Germans knew who and where they were. After broadcasting for Berlin up to the very end of the war, Gillars tried but failed to pose as a refugee, and was captured by US authorities. Her 1949 trial for treason captured the attention and raw emotion of a nation fresh from the horrors of the Second World War. Gillars’s twelve-year imprisonment and life on parole, including a stay in a convent, is a remarkable story of a woman who attempts to rebuild her life in the country she betrayed.