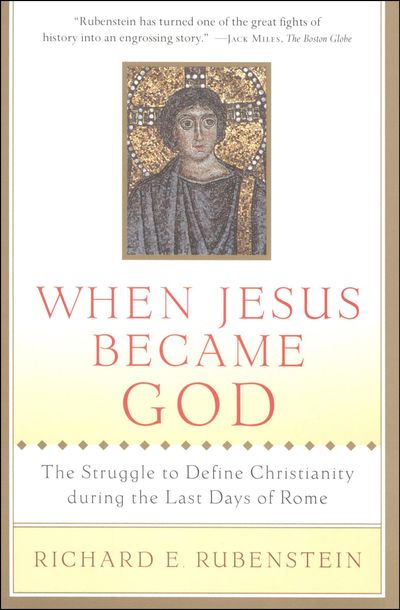 Published by Houghton Mifflin Harcourt
“[A] panoramic view of early Christianity as it developed against the backdrop of the Roman Empire of the fourth century” (Publishers Weekly).

The story of Jesus is well known, as is the story of Christian persecutions during the Roman Empire. The history of fervent debate, civil strife, and bloody riots within the Christian community as it was coming into being, however, is a side of ancient history rarely described.

Richard E. Rubenstein takes the reader to the streets of the Roman Empire during the fourth century, when a fateful debate over the divinity of Jesus Christ is being fought. Ruled by a Christian emperor, followers of Jesus no longer fear for the survival of their monotheistic faith. But soon, they break into two camps regarding the direction of their worship: Is Jesus the son of God and therefore not the same as God? Or is Jesus precisely God on earth and therefore equal to Him? The vicious debate is led by two charismatic priests. Arius, an Alexandrian priest and poet, preaches that Jesus, though holy, is less than God. Athanasius, a brilliant and violent bishop, sees any diminution of Jesus’s godhead as the work of the devil. Between them stands Alexander, the powerful Bishop of Alexandria, who must find a resolution that will keep the empire united and the Christian faith alive.

With thorough historical, religious, and social research, Rubenstein vividly recreates one of the most critical moments in the history of religion.

“A splendidly dramatic story . . . Rubenstein has turned one of the great fights of history into an engrossing story.” —Jack Miles, The Boston Globe; author of God: A Biography