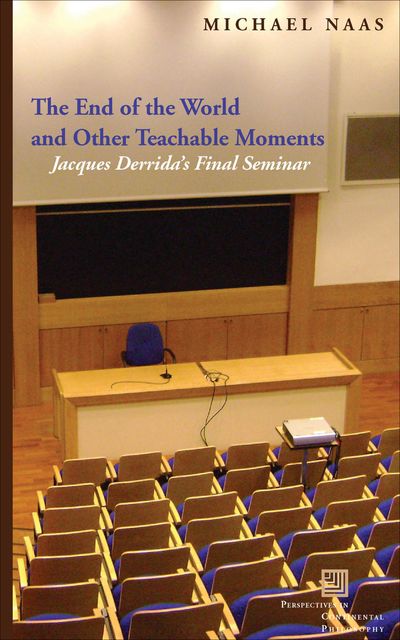 The End of the World and Other Teachable Moments

Published by Fordham University Press
A Derrida scholar traces the evolution of the philosopher’s final seminar in Paris as he contemplates the state of the world and his own mortality.

For decades, philosopher Jacques Derrida held weekly seminars in Paris, spending years at a time on a single, complex theme. From 2001 to 2003, he delivered the final work in this series, entitled “The Beast and the Sovereign.” As this final seminar progressed, its central theme was diverted by questions of death, mourning, memory, and, especially, the end of the world. Now philosopher and Derrida scholar Michael Naas takes readers through the remarkable itinerary of Derrida’s final seminar in The End of the World and Other Teachable Moments.

The book begins with Derrida’s analyses of the question of the animal in the context of his other published works on that subject. It then follows Derrida as a very different tone begins to emerge, one that wavers between melancholy and extraordinary lucidity with regard to the end of life. Focusing the entire second year on Daniel Defoe’s novel Robinson Crusoe and Martin Heidegger’s seminar “The Fundamental Concepts of Metaphysics,” Derrida explores questions of the end of the world and of an originary violence that is both creative and destructive.

The End of the World and Other Teachable Moments follows Derrida from week to week as he responds to these emerging questions, as well as to important events unfolding around him, both world events—the aftermath of 9/11, the American invasion of Iraq—and more personal ones, from the death of Maurice Blanchot to intimations of his own death less than two years away.