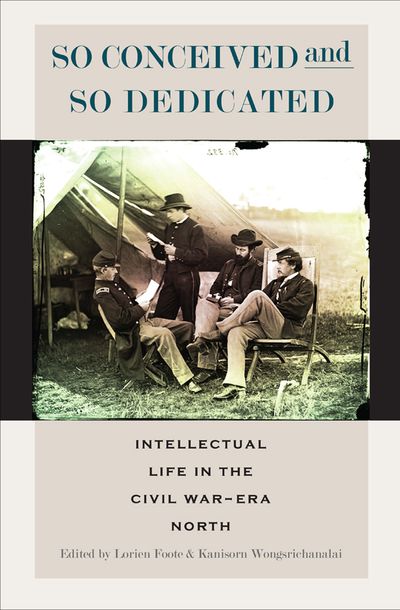 So Conceived and So Dedicated

With contributions from multiple historians, this volume addresses the role intellectuals played in framing the Civil War and implementing their vision of a victorious Union. Broadly defining “intellectuals” to encompass doctors, lawyers, sketch artists, college professors, health reformers, and religious leaders, the essays address how these thinkers disseminated their ideas, sometimes using commercial or popular venues and organizations to implement what they believed.

To what extent did educated Americans believe that the Civil War exposed the failure of old ideas? Did the Civil War promote new strains of authoritarianism in northern intellectual life, or reinforce democratic individualism? How did it affect northerners’ conception of nationalism and their understanding of their relationship to the state? These essays explore myriad topics, including:

*How antebellum ideas about the environment and the body influenced conceptions of democratic health
*How leaders of the Irish American community reconciled their support of the United States and the Republican Party with their allegiances to Ireland and their fellow Irish immigrants
*How intellectual leaders of the northern African American community explained secession, civil war, and emancipation
*The influence of southern ideals on northern intellectuals
*Wartime and postwar views from college and university campuses—and the ideological acrobatics that professors at Midwestern universities had to perform in order to keep their students from leaving the classroom
*How northern sketch artists helped influence the changing perceptions of African American soldiers over the course of the war

Collectively, So Conceived and So Dedicated offers an in-depth look at this part of the nation’s intellectual history—and suggests that antebellum modes of thinking remained vital and tenacious well after the Civil War.