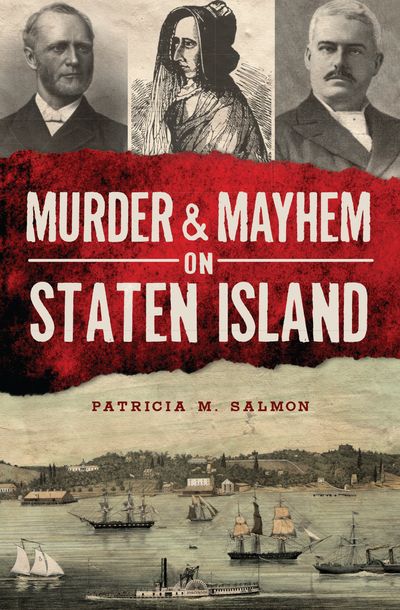 Published by Arcadia Publishing
New York City’s own Lizzie Borden, and eleven other true crimes “as ghastly as anything in American Horror Story” (SILive.com).

Today, Polly Bodine’s name is lost to history. But on Christmas night of 1843, she was accused of murdering her sister-in-law and infant niece in ways so heinous that the great showman P.T. Barnum, proclaimed her “The Witch of Staten Island.” Even Edgar Allan Poe weighed in on the female fiend, fearing she’d escape justice. He was right. Polly was tried three times, finally acquitted, and disappeared into anonymity—and legend—until her death fifty years later.

Her story is just one of a dozen horrific murders unearthed by historian Patricia M. Salmon in this fascinating peek into the gruesome history of the New York borough. Among the other headline-making cases: The Baby Farm Murders, The Jazz Age Kiss Slayer, The Body in the Barrel, and more. These turn-of-the century tabloid tales of serial killers and psychopaths, love gone wrong, cold-blooded revenge, and unsolved mysteries are still the stuff of nightmares.