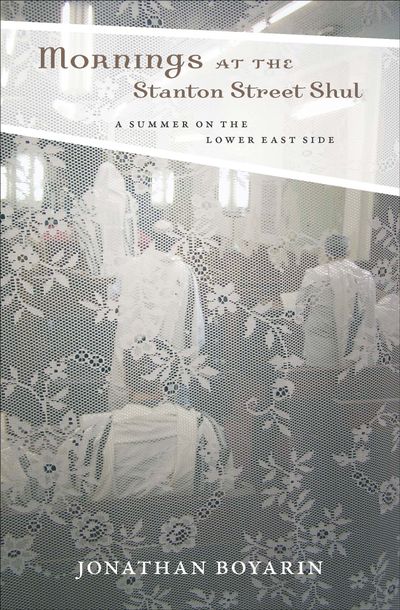 Mornings at the Stanton Street Shul

Published by Fordham University Press
This story of one of the last remaining synagogues in the historic neighborhood and its congregation is “as absorbing as a good cinema verité documentary” (Booklist).

On New York’s Lower East Side, a narrow building, wedged into a lot designed for an old-law tenement, is full of clamorous voices—the generations of the dead, who somehow contrive to make their presence known, and the newer generation, keeping the building and its memories alive and making themselves Jews in the process. In this book, Jonathan Boyarin, at once a member of the congregation and a bemused anthropologist, follows this congregation of “year-round Jews” through the course of a summer during which its future must once again be decided.

Famous as the jumping off point for millions of Jewish and other immigrants to America, the neighborhood has recently become the hip playground of twentysomething immigrants to the city from elsewhere in America and from abroad. Few imagine that Jewish life there has stubbornly continued through this history of decline and regeneration. Yet, inside with Boyarin, we see the congregation’s life as a combination of quiet heroism, ironic humor, lively disputes, and—above all—the ongoing search for ways to connect with Jewish ancestors while remaining true to oneself in the present.

Mornings at the Stanton Street Shul is both a portrait of a historic neighborhood facing the challenges of gentrification, and a poignant, humorous chronicle of vibrant, imperfect, down-to-earth individuals coming together to make a community.