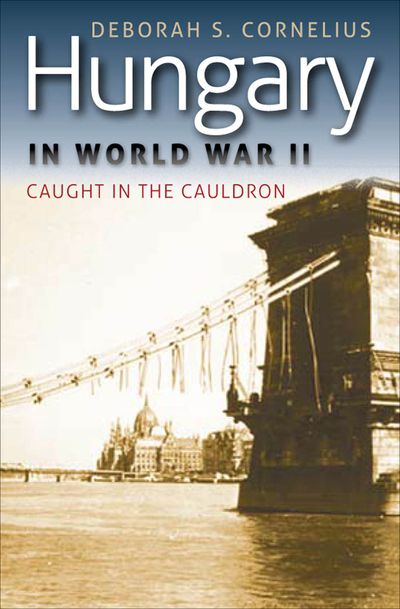 Published by Fordham University Press
A historian examines why Hungary allied with the Nazis, and the devastating consequences for the country.

The full story of Hungary’s participation in World War II is part of a fascinating tale of rise and fall, of hopes dashed and dreams in tatters. Using previously untapped sources and interviews she conducted for this book, Deborah S. Cornelius provides a clear account of Hungary’s attempt to regain the glory of the Hungarian Kingdom by joining forces with Nazi Germany—a decision that today seems doomed to fail from the start. For scholars and history buffs alike, Hungary in World War II is a riveting read.

After the First World War, the new country of Hungary lost more than 70 percent of its territory and saw its population reduced by nearly the same percentage. But in the early years of World War II, Hungary enjoyed boom times—and the dream of restoring the Hungarian Kingdom began to rise again.

As the war engulfed Europe, Hungary was drawn into an alliance with Nazi Germany. When the Germans appeared to give Hungary much of its pre-World War I territory, Hungarians began to delude themselves into believing they had won their long-sought objective. Instead, the final year of the world war brought widespread destruction and a genocidal war against Hungarian Jews. Caught between two warring behemoths, the country became a battleground for German and Soviet forces—and in the wake of the war, Hungary suffered further devastation under Soviet occupation and forty-five years of communist rule. This is the story of a tumultuous time and a little-known chapter in the sweeping history of World War II.