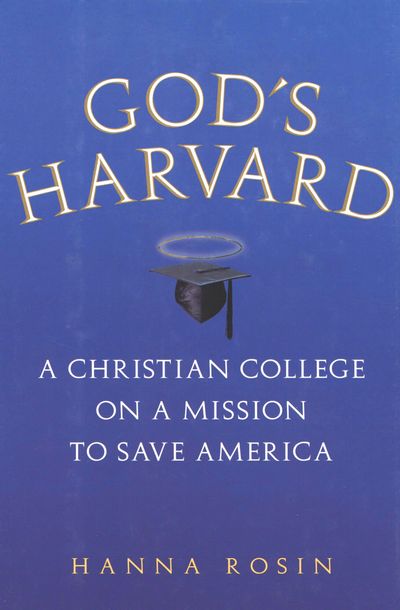 Take a walk down the halls and into the dorms and hearts of tiny Patrick Henry College, a Christian school just outside the nation’s capital, where ambitious young evangelicals are groomed to become tomorrow’s conservative elite. The future front lines of politics, entertainment, and science will be commanded by these idealistic graduates, who plan to lead the battle in reclaiming a godless nation.

God’s Harvard reveals the evangelical movement at a moment of crisis and climax, its future leaders struggling to resist the temptations of modern life even as they try to remake the world in their image. This is a vibrant, insightful look at kids who may very well be in charge of our country one day.

“A rare accomplishment for many reasons—perhaps most of all because Rosin is a journalist who not only reports but also observes deeply.” —San Francisco Chronicle

“Rosin is at her best when chronicling sympathetically the lives of these young evangelicals, as ambitious as their secular peers but single-minded in their focus on politics.” —Chicago Tribune

“Nuanced and highly readable . . . With her feisty, richly detailed prose.” —The Washington Post