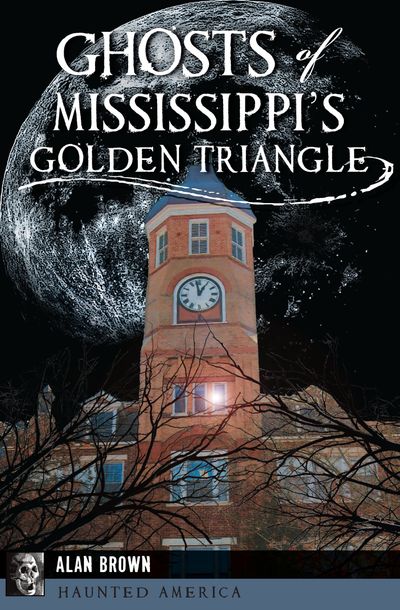 Published by Arcadia Publishing
Discover the spine-chilling stories and local legends of this corner of the American South . . . Includes photos!

Mississippi’s Golden Triangle is a major modern hub—but restless spirits of Native Americans, Civil War soldiers, and slaves also wander this region. Tales of a mysterious watchman who patrols the railroad tracks between Artesia and Mayhew haunt curious locals. Ed Kuykendall Sr. is rumored to manage Columbus’s Princess Theater from beyond the grave. A young girl who died while attempting to free her head from a stair banister is said to still walk the halls of Waverly. In this fascinating tour, author Alan Brown uncovers the eerie thrills and chills that are part of local history.

“[Alan Brown’s] newest collection of stories involves a couple of places in Monroe County, namely the Gregg-Hamilton House in Aberdeen and the remains of the Gulf Ordnance Plant in Prairie . . . [In the Golden Triangle,] he found plentiful resources of historical information.” —Monroe Journal