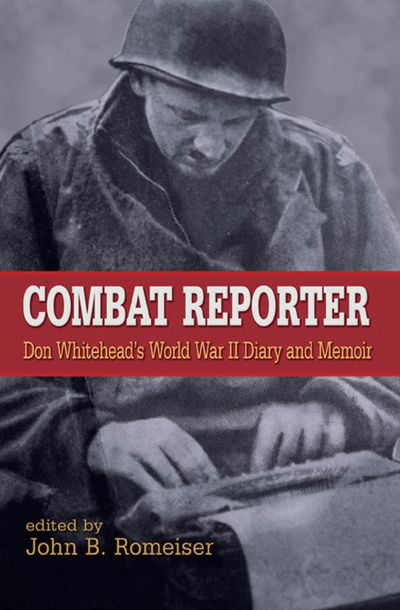 Legendary reporter Don Whitehead covered almost every important Allied invasion and campaign in Europe—from North Africa to landings in Sicily, Salerno, Anzio, and Normandy, and to the drive into Germany. His dispatches, published in Beachhead Don, are treasures of wartime journalism.

From September 1942, as a freshly minted Associated Press journalist in New York, to the spring of 1943 as Allied tanks closed in on the Germans in Tunisia, he also kept a diary of his experiences as a rookie combat reporter. The diary stops in 1943, and it has remained unpublished until now. Later, Whitehead started work on a memoir of his extraordinary life in combat that would remain unfinished.

In this book, John B. Romeiser has woven both the North African diary and Whitehead’s memoir of the subsequent landings in Sicily into a vivid, unvarnished, and completely riveting story of eight months during some of the most brutal combat of the war. Here, Whitehead captures the fierce fighting in the African desert and Sicilian mountains, as well as rare insights into the daily grind of reporting from a war zone, where tedium alternated with terror. These writings by two-time Pulitzer Prize winner offer a unique and up-close view of the Second World War—as well as a reminder of the risks journalist take to bring us the first draft of history.

“No one bore witness better than Don Whitehead . . . this volume, deftly combining his diary and a previously unpublished memoir, brings Whitehead and his reporting back to life, and twenty-first-century readers are the richer for it.” —from the foreword by Rick Atkinson