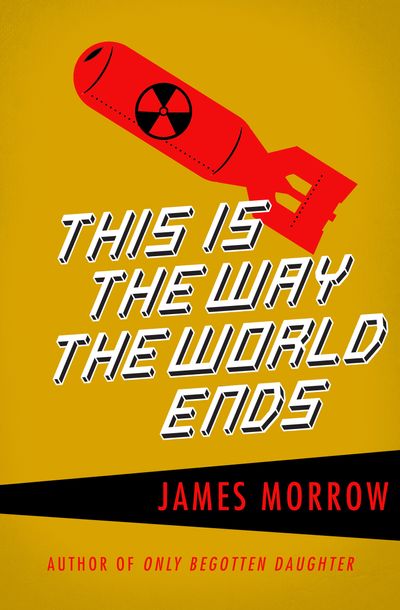 This Is the Way the World Ends

Published by Open Road Media
Nebula Award Finalist: A fantastical and darkly comic tale of nuclear apocalypse that “begins where Dr. Strangelove ends” (The Philadelphia Inquirer).
George Paxton is a simple man, happy enough with his job carving inscriptions on gravestones. All he needs is a high-tech survival garment—a scopas suit—to protect his beloved daughter in the event of nuclear Armageddon. But when George finally acquires the coveted suit, the deal comes with a catch: He must sign a sales contract admitting to his complicity in the nuclear arms race between the US and the Soviets.
Inevitably, the bombs fall, and our hero finds himself imprisoned on a submarine headed for Antarctica, where he and five other survivors will stand trial for “crimes against humanity.” George Paxton’s accusers are no ordinary plaintiffs: They are “the unadmitted,” potential people whose hypothetical lives were canceled in consequence of humankind’s self-extinction. In the months that follow, George’s dark journey will take him through the hellscape that was once the Earth, through a human past that has become as unthinkable as the human future, to his day in court before the South Pole tribunal, and finally into the intolerable heart of loss.

From the World Fantasy Award–winning author of Only Begotten Daughter and Towing Jehovah, this is an “astute, highly engaging, and . . . moving” journey into a bizarre postapocalyptic world (Los Angeles Times).