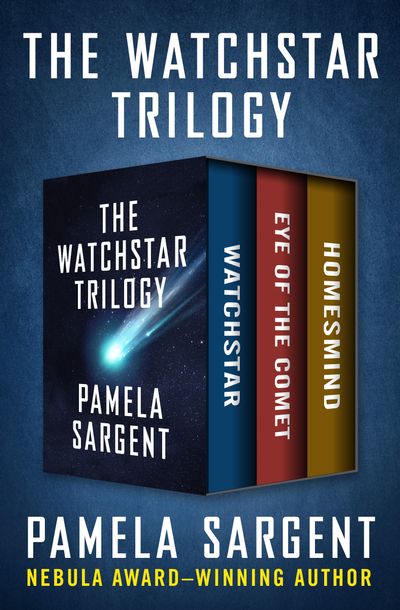 published by
Open Road Media
The adventures of three brave young heroines in a telepathic dystopia, from the Nebula Award–winning author and “one of the genre’s best writers” (The Washington Post).

In Pamela Sargent’s fascinating vision of a far-future, post-technological agrarian society, Earthfolk communicate with each other telepathically, can heal themselves, and fly at will, all by using their mindpowers. But those born without psychic ability—solitaries—must be euthanized to preserve the harmony of the society. This is the way of the world—until the appearance of a mysterious comet in the sky.

Watchstar: The time has come. Daiya has turned fourteen and must now survive a rite of passage in the desert in order to join the Net—the telepathic web of the villagers’ minds. During this ordeal, she encounters a young man who has come down in a shuttle from a comet with startling news: His people are descended from those who fled Earth thousands of years ago. He is also a solitary. Now everything Daiya has accepted at face value is about to be challenged . . .

Eye of the Comet: Young Lydee has always known this strange but wonderful comet-world to be Home. Like all skydwellers, she is linked through an implant to an omnipresent cybernetic intelligence known as the Homesmind, which guides the fate of her world and the people in it. Now she has a special task to perform, for she may be the only one who can be a bridge between her comet Home and her species’ native Earth.

Homesmind: Anra, niece of Daiya, is a solitary, born without the power to mindspeak. Once, she would have been killed at birth. But now the skydwellers of the Wanderer, the comet controlled by Homesmind, supply solitaries with implants that allow artificial mindspeaking. The people of Earth still consider solitaries an abomination and skydwellers soulless—making Anra and her brethren outcasts in two worlds. But when another comet enters the system, speaking directly to the Earthfolk, seducing them to oblivion, only Anra and her fellow solitaries have the power to resist the call and attempt to save their people.