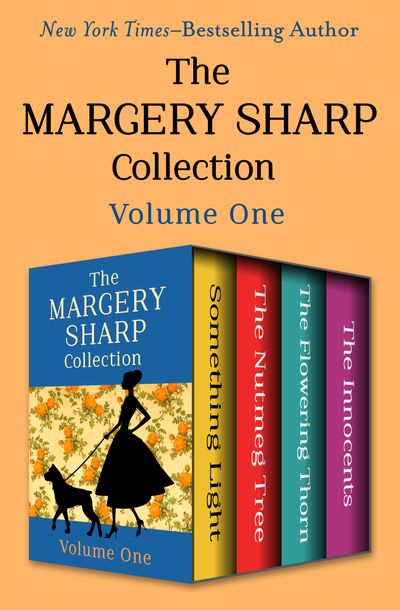 The Margery Sharp Collection Volume One

A master of the twentieth-century comedy of manners, British author Margery Sharp has been praised as “one of the most gifted writers of comedy” (Chicago Daily News) and “a wonderful entertainer” (The New Yorker). Available for the first time in a single volume, this quartet of novels provides a shining example of “her brilliantly acerbic fiction . . . [and] one of her greatest talents, creating female characters of toughness and complexity” (The New York Times).

Something Light: In 1950s London, professional dog photographer Louisa Datchett has decided it’s high time she snared herself a husband. Up until now, she’s been indiscriminately fond of men, who’ve taken shocking advantage of her good nature. At age thirty Louisa is ready for someone to take care of her and sets out on her romantic quest, in this New York Times bestseller.

The Nutmeg Tree: Motherhood was never really free-spirited Julia Packett’s thing. Following the loss of her husband in World War I, Julia turned to her well-heeled in-laws to raise her daughter. Now twenty, Susan invites her mother to France for the summer to persuade her grandmother to allow her to marry. When Julia arrives, she quickly sees that her proper daughter is mismatched with a playboy. And when Susan’s distinguished legal guardian, Sir William Waring, shows up, romantic complications ensue.

The Flowering Thorn: In 1929 London, socialite Lesley Frewen impulsively decides to adopt an orphaned boy. Moving to the tiny village of High Westover, Lesley finds herself challenged by a whole new way of life and changed by a young boy who begins to awaken her capacity to love.

“To those who ‘discovered’ Margery Sharp with The Nutmeg Tree, the reissue of this earlier novel . . . will be good news. The city-bred-country-won theme is handled with gay humor and enough of sentiment for general appeal.” —Kirkus Reviews

The Innocents: As World War II separates a three-year-old, mentally challenged girl from her parents, a British spinster takes on the responsibility of raising her and the two grow closer. But when the war is over and the girl’s mother returns, Antoinette doesn’t want to be separated from the only person who’s ever really understood her.