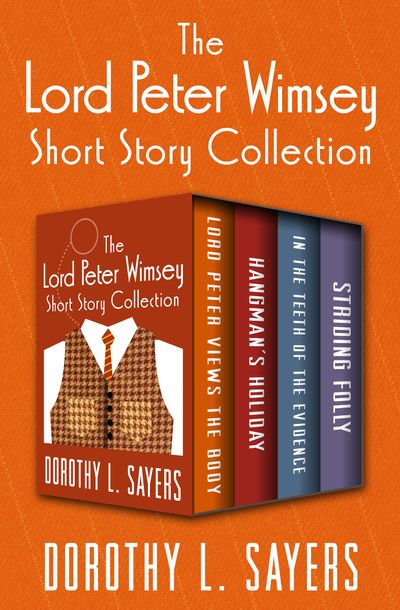 A gentleman needs hobbies. For Lord Peter Wimsey—a Great War veteran with a touch of shell shock—collecting rare books, sampling fine wines, and catching criminals are all most pleasant diversions. In these Golden Age whodunits, “Lord Peter can hardly be spared from the ranks of the great detectives of the printed page” (The New York Times).

Lord Peter Views the Body: In these early adventures, Lord Peter confronts a stolen stomach, a man with copper fingers, and a deadly adventure at Ali Baba’s cave, among other conundrums that tax his intellect, humor, acting talent, knowledge of metallurgy, and taste for fine wines. It’s not easy being a gentleman sleuth, but Lord Peter was born to play the part.

In the Teeth of the Evidence: In this volume of “truly remarkable stories,” a pair of classic Wimsey stories appear alongside five featuring Montague Egg, the eccentric purveyor of wines whose powers of deduction could give His Lordship a run for his money. A handful of other glittering puzzles round out the volume, “adding much to the already great reputation of Dorothy L. Sayers” (The New York Times).

Striding Folly: Lord Peter confronts land barons, killers, and the terror that comes from raising three young sons. Through it all, his clear thinking never fails him, and he tackles these puzzles with his usual aplomb. He may be a family man now, but like a good wine, a great detective only gets better with age.

Ruth Rendell praised Sayers for her “great fertility of invention, ingenuity and a wonderful eye for detail,” and P. D. James said, “She brought to the detective novel originality, intelligence, energy and wit.” Those same sparkling qualities are on display in these outstanding short stories.