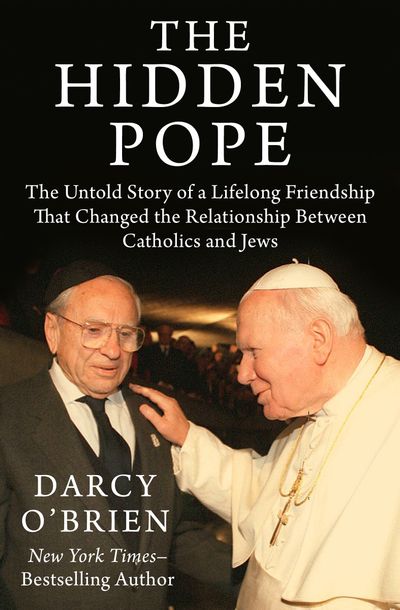 Published by Open Road Media
From a PEN/Hemingway Award–winning author: The true story of Pope John Paul II, his Jewish childhood friend, and a milestone in religious history.

In October 1978, Karol Wojtyla, Polish Archbishop of Krakow, became Pope John Paul II, the first non-Italian pontiff in 455 years. He had a mission to improve the Catholic Church’s relations with Judaism, Islam, and the Anglican Communion. Only days after the election, he granted Jerzy Kluger, a virtually unknown Jewish businessman, the privilege of first audience at the Vatican. Jerzy was overwhelmed, but not surprised. When they were children, Karol and Jerzy were best friends, known then as Lolek and Jurek. For the pope, this union of Catholic and Jewish faiths was a profound symbol of things to come. It was also a personal gesture that reflected a remarkable bond between the two men.

The Hidden Pope is the story of that relationship, from their simple boyhood in the small town of Wadowice in southern Poland to their separation at the beginning of World War II and their survival under Nazi occupation and Soviet tyranny. The reunion almost thirty years later—after Jerzy lost his family in the Holocaust and spent years in Stalinist labor camps—would not only deepen a friendship, but also afford Jerzy a unique perspective on papal intrigue and policies when he was eventually appointed diplomat between the Vatican and Israel.

Set against the landmark events of the twentieth century, and the monumental reconciliation between Christianity and Judaism, this singular portrait of John Paul II reveals him as only one of his closest friends can. Readers will come to know the Holy Father as a man, to understand his controversial ideas as expressions of his life experiences, and to discover the genesis of an enduring friendship that would impact the world.

The Hidden Pope is “a fascinating personal tale played out against the great moments of modern European history. . . . Anyone intrigued by the often surprising confluences of history, politics and religion will relish this impressive study in faith, friendship and mutual respect” (Publishers Weekly).