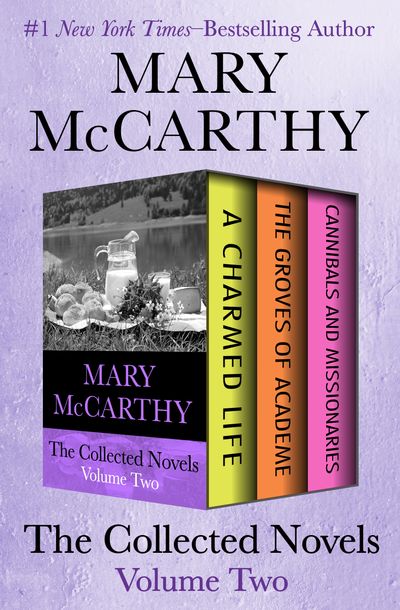 Published by Open Road Media
Sharply observed literary fiction from the #1 New York Times–bestselling author of The Group and a “delightfully polished writer” (The Atlantic Monthly).

New York Times–bestselling author Mary McCarthy wrote with “an icily honest eye and a glacial wit that make her portraits stingingly memorable” (The New York Times). From a trenchant portrait of marriage to an academic satire to an unconventional thriller, the three novels in this collection show the range of an author possessed of “an uncanny flair for fastening on detail that has an electric impact on the reader” (The Atlantic Monthly).

A Charmed Life: In this New York Times bestseller, former actress and budding playwright Martha Sinnott longs to recapture the “charmed life” she abandoned when she divorced her first husband. So she returns to her beloved New England artists’ colony with her second spouse. But her arrogant ex, Miles, lives dangerously close by with his new wife. And in a pervasive atmosphere of falsehoods and self-delusions, the biggest lie of all is Martha’s belief that her reunion with Miles won’t somehow wreak terrible havoc on all she holds dear.

The Groves of Academe: College instructor Henry Mulcahy embarks on a fanatical quest to save his job—and enact righteous revenge—in this “brilliantly stinging” satire of university politics during the early Cold War years (The New York Times).

Cannibals and Missionaries: En route to Iran, a plane is hijacked by Middle Eastern terrorists intent on holding hostage the politicians, religious leaders, and activists on a mission to investigate charges of human rights violations by the Shah. Soon the kidnappers discover a greater treasure onboard: prominent art collectors with access to some of the world’s most valuable paintings—which could fund global terrorism. As both captors and captives confront bitter truths about their conflicting values and ideologies, the clock races toward an explosive endgame.