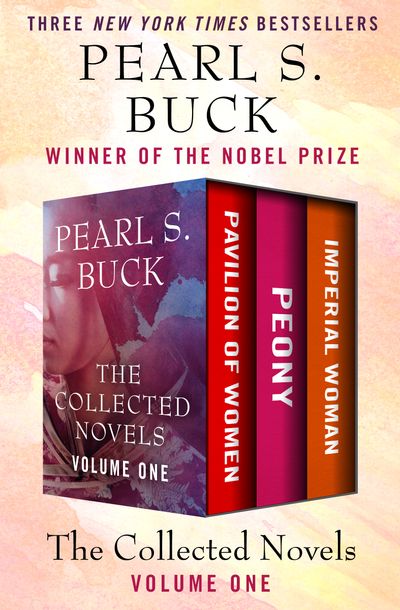 The Collected Novels Volume One

Published by Open Road Media
From the Nobel Prize–winning author of The Good Earth: These three novels are fascinating portraits of women in China.

In 1938, Pearl S. Buck became the first woman to win a Nobel Prize in Literature for The Good Earth, which had already earned her the Pulitzer Prize. Upon choosing Buck’s novel for her book club in 2004, Oprah Winfrey said: “Reading Pearl Buck’s writing feels like reading poetry to me. I just love the quiet rhythm of the words. They evoke the simple beauty of the characters and the harsh mystery of China’s ancient culture.” The daughter of missionaries, the New York Times–bestselling author would continue to explore many aspect of Chinese culture in her work, and the three novels collected in this volume represent some of her most compassionate and revealing fiction.

Pavilion of Women: This “vivid and extremely interesting novel,” set in early twentieth-century China, follows an upper-class wife’s quest for personal freedom (The New Yorker). After Madame Wu turns forty, she encourages her husband to take a young concubine so she can finally begin to discover her own mind—and a new world opens up before her as she reads forbidden books and studies English with a progressive former priest.

Peony: A young Chinese bondmaid in nineteenth-century China falls in love with the son of the wealthy Jewish family she works for. As the couple’s traditions collide, their relationship faces opposition from every side.

“Peony has the vividness of scene and episode and character and the colorful detail that [Buck’s] readers have come to expect of her novels in China.” —New York Herald Tribune

Imperial Woman: In this “richly woven . . . quite absorbing” New York Times bestseller, Buck brings to life the story of Tzu Hsi, the magnetic and fierce-minded woman who rose from concubine to become the working head of the Qing Dynasty and the last empress of China for nearly half a century (The Nation).

“Certainly, no fictioneer could imagine a more incredible woman. . . . Pearl Buck has done a remarkable and painstaking job in recreating her.” —Saturday Review