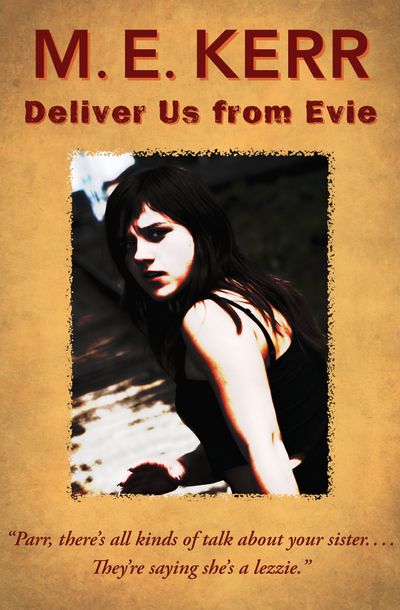 Deliver Us from Evie

Published by Open Road Media
Award-winning author M. E. Kerr challenges stereotypes in this story about a fifteen-year-old grappling with his older sister’s sexuality
Parr Burrman lives with his parents and his older brother and sister on a farm in Missouri. They’re a typical Midwestern family—except for one thing.
Parr’s father thinks Evie’s going to marry Cord Whittle, who’s had a crush on her forever, and settle down in their hometown to help out with the farm. Instead, she falls in love with Patsy Duff, the gorgeous, privileged daughter of the banker who holds the mortgage on the Burrmans’ property. When rumors start flying about Evie and Patsy, Parr has to contend with the derision of his classmates . . . and when he falls for a girl from a fundamentalist family who fears homosexuality like God’s wrath, he must face his own conflicted emotions. Soon, Parr’s parents—and the whole town—will know the truth about Evie. But it’s Parr who has to deal with the burden of shame when his own behavior leads to a shattering betrayal . . . and a secret he’ll carry to the grave.
Written with grace, humor, and love, and featuring sympathetic characters you won’t soon forget, Deliver Us from Evie is a compassionate, vividly evocative novel by a master storyteller.
This ebook features an illustrated personal history of M. E. Kerr including rare images from the author’s collection.