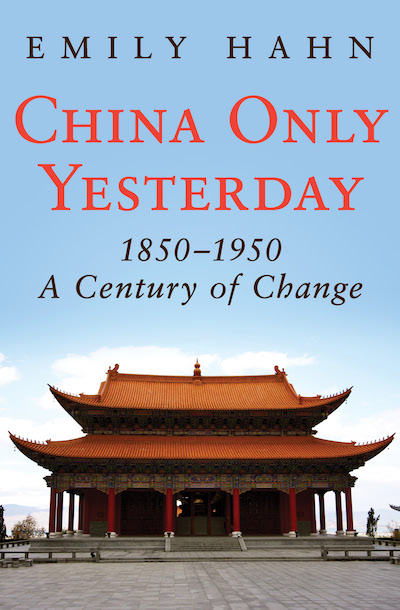 Published by Open Road Media
A fascinating journey through 100 years of Chinese history, beginning with the historic Treaty of Nanking and ending with Mao Tse-tung’s creation of the Chinese People’s Republic, by the the acclaimed New Yorker correspondent who lived in China from 1935 to 1941

For centuries, China’s code of behavior was incomprehensible to Westerners whom the Chinese viewed as irredeemable barbarians. Presenting historical events with an immediacy that makes you feel as if you were there, Hahn takes readers through isolationist China’s difficult and often costly adaptations to the invasions of Western “foreign devils”, —from the Treaty of Nanking in 1842, which gave the West access to five 5 of China’s eastern ports, to the British colonization of Hong Kong, the rise of the tea trade, the Opium Wars, the arrival of Christian missionaries, and the Boxer Rebellion.

Hahn also illuminates the revolutionary movement led by Sun Yat-sen, the overthrow of the Ch’ing Dynasty, the escalating tensions between the Communist and Nationalist parties, and the Japanese invasion on the eve of World War II—which Hahn witnessed firsthand. The final chapters cover the civil war, which ended with Chairman Mao’s formation of the People’s Republic of China and Chiang Kai-shek’s retreat to Taiwan. With an insider’s knowledge of Chinese culture and the politics, Hahn delivers a sharply observant book that illuminates an unforgettable era in China’s tumultuous past.