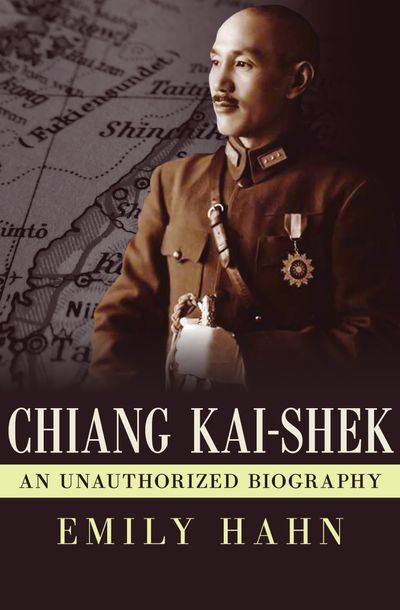 Published by Open Road Media
An in-depth biography of the towering 20th-century Chinese military and political figure who led the government, first on the mainland and then in exile in Taiwan, from the acclaimed New Yorker correspondent who lived in China when he was head of state

In 1911, 24-year-old Chiang Kai-shek was an obscure Chinese student completing his military training in Japan, the only country in the Far East with a modern army. By 1928, the soldier who no one believed would ever amount to anything had achieved world fame as the leader who broke with Russia and released the newly formed Republic of China from Communist control.

Emily Hahn’s eye-opening book examines Chiang’s friendship with revolutionary Sun Yat-sen and chronicles his marriage to the glamorous, American-educated Soong May-ling, who converted him to Christianity and helped him enact social reforms. As the leader of the Nationalist Party, Chiang led China for over two decades: from 1927 through the Japanese invasion, World War II, and the civil war that ended with a Communist victory in 1949. After defeat, he retreated with his government to Taiwan where he continued to lead as president of the exiled Republic of China until his death in 1975. Famous for forging a new nation out of the chaos of warlordism, he was an Allied leader during the Second World War, only to end up scorned as an unenlightened dictator at the end of his life. Casting a critical eye on Sino-American relations, Hahn sheds new light on this complex leader who was one of the most important global political figures of the last century.