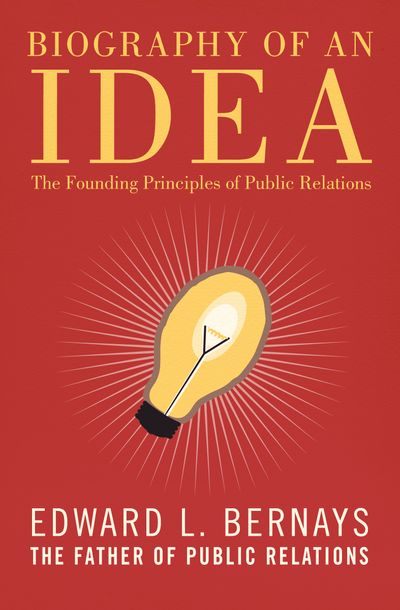 Biography of an Idea

Published by Open Road Media
The father of public relations looks back on a landmark life spent shaping trends, preferences, and general opinion

A twentieth-century marketing visionary, Edward L. Bernays brilliantly combined mastery of the social sciences with a keen understanding of human psychology to become one of his generation’s most influential social architects. In Biography of an Idea, Bernays traces the formative moments of his career, from his time in the Woodrow Wilson administration as one of the nation’s key wartime propagandists to his consultancy for such corporate giants as Procter & Gamble, General Electric, and Dodge Motors. While working with the American Tobacco Company, Bernays launched his now-infamous Lucky Strike campaign, which effectively ended the long-standing taboo against women smoking in public.

With his vast knowledge of the psychology of the masses, Bernays was in great demand, advising high-profile officials and counseling the tastemakers of his generation. His masterful and at times manipulative techniques had longstanding influences on social and political beliefs as well as on cultural trends. Biography of an Idea is a fascinating look at the birth of public relations—an industry that continues to hold sway over American society.