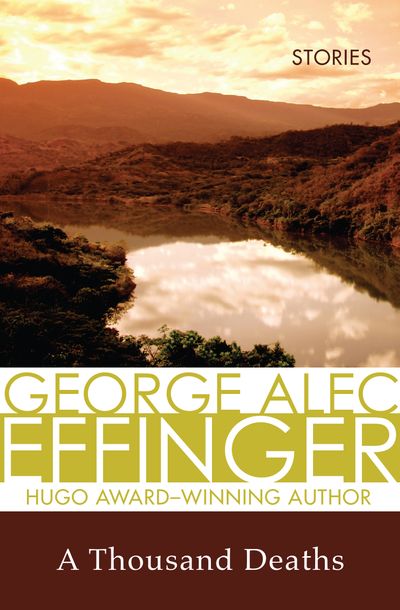 Published by Open Road Media
Science fiction stories that offer “a poignant glimpse into the author’s psyche . . . this bittersweet collection [is] one to be cherished” (Publishers Weekly).

When we first meet Courane, he must face down TECT, the self-aware computer that has come to control Earth and its colonial planets. Exiled to Planet D, Courane races to cure the debilitating disease that attacks each of the planet’s residents, even as his own memory begins to fade. Unfortunately, his only source of information about the illness is TECT itself, and the computer’s agenda doesn’t seem to line up with Courane’s.

In the seven other stories contained in A Thousand Deaths, Courane begins to blur reality and fiction as Effinger expertly plays with narrative conventions. However, these are not simply the whims of a science fiction writer; they are the frameworks the Nebula and Hugo Award–nominated author uses to answer questions about existence no one else even thought to ask. While George Alec Effinger’s Budayeen novel When Gravity Fails is perhaps his most famous work, his lesser-known novel The Wolves of Memory remained his favorite. In it, he introduced readers to Sandor Courane, an everyman and Effinger stand-in who struggles as he swims against the currents of fate. In life and in his multiple deaths, Sandor Courane serves as the unifying force in this collection of Effinger’s stories, starting with The Wolves of Memory and getting ever more clever and off the wall from there.