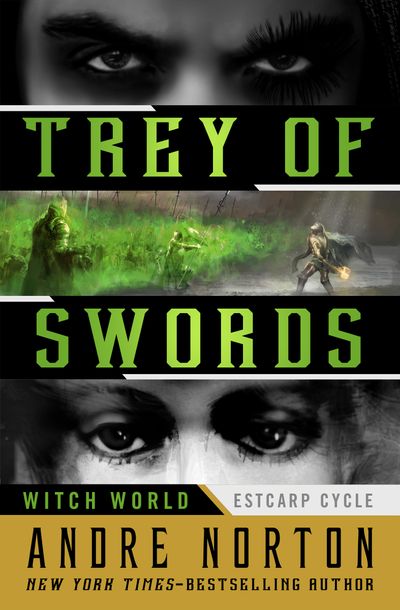 Published by Open Road Media
A trilogy of swords, sorcery and spectacular adventure set in the Witch World.

Sword of Ice: A simple half-breed serving under Lord Hervon in the unending battle against the Forces of Darkness, young Yonan never thought he was made for warfare. Then he discovers a strange sword: an ancient blade of incredible power that holds the spirit of the ancient hero Tolar that will forge Yonan into the greatest weapon in Witch World.

Sword of Lost Battles: Yonan and his loyal friend Uruk have proven themselves as formidable warriors in battle after battle. And now, only they can stop the dreaded Targi—the near-invincible warlock who leads the Darkness. To defeat him, Yonan and Uruk must find Targi’s only vulnerability—a weak point that takes them into the past and the legendary Lost Battle.

Sword of Shadows: With Yonan and Uruk still missing in the past, the untrained witch Crytha learns that she alone must hold back the Darkness by countering the power of Laidan, the vile sorceress who has pledged herself to Targi. To overcome such a foe, Crytha will need the help of a lethal, legendary weapon that must be tamed before it can be used. And if she fails to tame the Sword of Shadows, all of Witch World may fall.

Trey of Swords is the 1st book in the Witch World: Estcarp Cycle, but you may enjoy reading the series in any order.