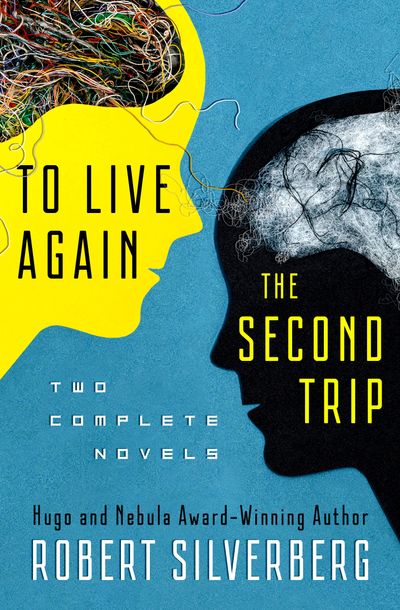 To Live Again and The Second Trip

Published by Open Road Media
Two enthralling novels by Robert Silverberg about a future in which the minds of the living can be changed for a price—often with dire consequences
In To Live Again, thanks to the Scheffing Institute, death is not the end. For a hefty fee, the soul bank stores the personas of those who have died and inserts them into the brains of willing, living hosts. It’s a process that integrates the two minds, imbuing the host with a menu of highly valuable abilities, memories, and traits. The more personas one absorbs, the greater his social status. When banking mogul Paul Kaufmann dies, many people apply to receive his persona. The leading applicants—his bitter business rivals—are locked in a battle to claim his soul. The Institute follows strict rules to ensure that the host always remains in control, but of course accidents do happen . . . In The Second Trip, Paul Macy wears the Rehab badge, the sign of healing that advertises his status as a reconstruct job. When society derides capital punishment and opts, instead, for personality rehabilitation, criminals undergo mindpick operations in which their identities are stripped and extinguished. Given a new bank of memories and a fresh identity, they are offered a second chance at life. For Paul, though, this gift comes with a price. His former self still lingers inside him, waiting for the opportunity to emerge and battle Paul’s new self for ultimate control. This ebook features an illustrated biography of Robert Silverberg including rare images and never-before-seen documents from the author’s personal collection.