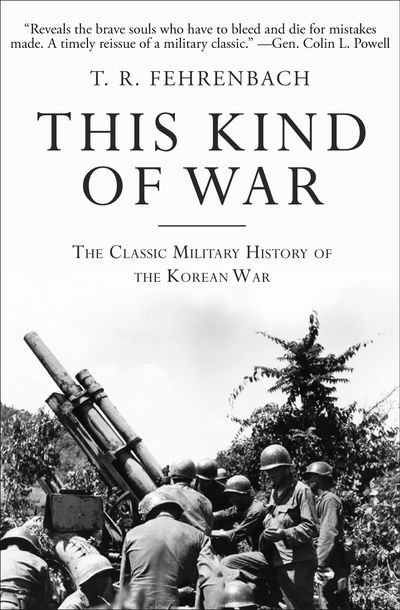 This Kind of War

In a recent story, Newsweek reported: “Amid increasingly deteriorating relations between the U.S. and North Korea, as President Donald Trump and Kim Jong Un exchange barbs and the threat of a nuclear conflict looms, Mattis responded to a question on how best to avoid such a war.

“An audience member asked: ‘What can the U.S. military do to lessen the likelihood of conflict on the Korean Peninsula?’

“Mattis responded with a direction to read This Kind of War, stating: ‘There’s a reason I recommend T.R. Fehrenbach’s book, that we all pull it out and read it one more time.’”

This Kind of War is “perhaps the best book ever written on the Korean War” (John McCain, The Wall Street Journal), the most comprehensive single-volume history of the conflict that began in 1950 and is still affecting US foreign policy. Fifty years later, not only does this enlightening account give details of the tactics, infantrymen, and equipment, it also chronicles the story of military and political unpreparedness that led to a profligate loss of American lives in Korea.

T. R. Fehrenbach, an officer in the conflict, provides us with accounts of the combat situation that could only have been written by an eyewitness in the thick of the action. But what truly sets this book apart from other military memoirs is the piercing analysis of the global political maneuverings behind the brutal ground warfare that marked this bloody period of history, one that has been all but forgotten by many, but has become crucially important again.

“A 54-year-old history of the Korean War that’s much better known in military than civilian quarters . . . Interspersed with this high-level narrative are gritty, close-grained accounts of the grim ordeals, heroic sacrifices, and sometimes, tragic blunders of individual soldiers, from privates to generals.” —Politico