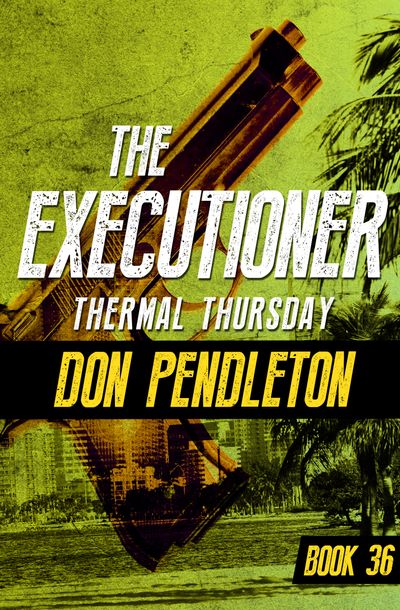 Published by Open Road Media
In the swamps of Florida, the Executioner attacks a ring of smugglers

They call themselves the devil force. A crew of modern-day pirates who report to the Mafia, they scour the coasts of Florida ripping off pleasure cruisers and small-time dealers. They are savage, they are scum—they are the perfect target for Mack Bolan. After countless battles against the Mafia, the Executioner has planned one final week of missions across a variety of states, intending to hit six mob outposts in as many days. But what he finds in Florida may take longer than twenty-four hours to destroy.

The devil force leads Bolan to an underground fortress where a cadre of mobsters have teamed up with a crazed scientist in a desperate attempt to upend the world of crime. To stop a scheme that could mean the end of the United States as we know it, Bolan will turn up the Florida heat higher than it’s ever gone before.

Thermal Thursday is the 36th book in the Executioner series, but you may enjoy reading the series in any order.