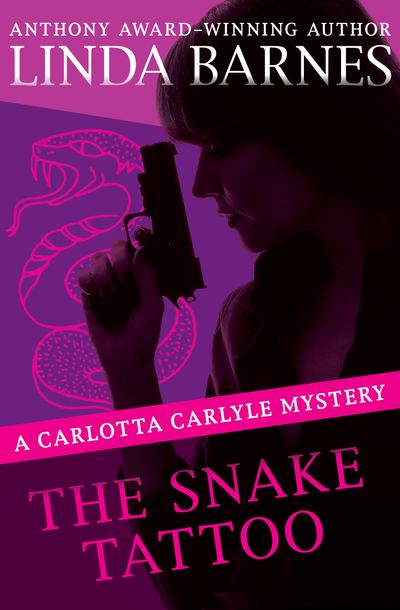 Carlotta Carlyle is halfway through a pizza when her former boss, Lieutenant Mooney of the Boston Police, shows up at her door needing help even more than Carlotta needs a case. In a Combat Zone bar, Mooney got into a scrap with a stranger over a woman. Now the stranger is comatose, the woman has vanished, and Mooney has been suspended. He wants Carlotta to find the blond hooker with a snake tattoo who witnessed the brawl, and who can exonerate him.

Doing surveillance in the Zone, Carlotta gets a second case. A ritzy prep school kid with a bloody lip hires her to find his missing girlfriend. Drawn into two different yet equally dangerous worlds where dead bodies are showing up, Carlotta has only two weeks to save the most honest cop in Boston from going to jail, and to find a girl whose privileged parents don’t seem to care that she’s run away.

The Snake Tattoo was named an outstanding book of the year by the London Times.

The Snake Tattoo is the 2nd book in the Carlotta Carlyle Mysteries, but you may enjoy reading the series in any order.