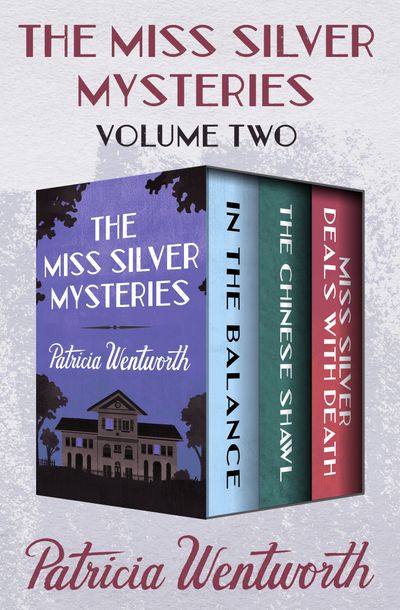 Published by Open Road Media
The British governess-turned-sleuth solves three of her most intriguing cases, in this “timelessly charming” series (Charlotte MacLeod).

Retired governess and teacher Maud Silver has found a new calling: private detection. With her knitting needles and fondness for Tennyson, she may seem an unlikely sleuth, but Scotland Yard would be lost without her. “Patricia Wentworth has created a great detective in Miss Silver, the little old lady who nobody notices, but who in turn notices everything” (Paula Gosling, author of the Jack Stryker Mysteries).

In the Balance: On a train back to London, Miss Silver meets a frightened new bride. Lisle Jerningham has fled her home after overhearing a seemingly sinister conversation. Her husband’s first wife died in an apparent accident, and the resultant infusion of cash saved his family home. Now he’s broke again. Will he attempt a second convenient mishap?

The Chinese Shawl: Actress Tanis Lyle may lack professional training, but her natural charisma seems to hypnotize all who meet her. The rising star has just finished filming her first motion picture. Unfortunately, it will turn out to be her last. Who did Tanis fail to charm? The answer could lie with a distant cousin and a long-standing family feud.

Miss Silver Deals with Death: In wartime London, the once grand Vandeleur House has been divided into flats, its glorious façade now concealing a nest of intrigue. When one inhabitant reports she’s being blackmailed by another, Miss Silver is brought in to sort out the suspects from the residents, which include a woman who lost her fiancé after their ship was struck by a Nazi torpedo and a sleepwalking maid with a curious past.