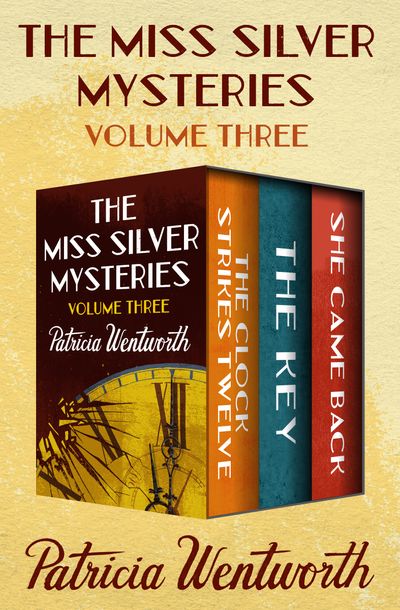 Published by Open Road Media
A trio of World War II–era whodunits in the “ingenious [and] satisfying” mystery series featuring a British governess-turned-amateur-sleuth (The Scotsman).

Meet Miss Maud Silver, a retired governess and “little old lady who nobody notices, but who in turn notices everything” (Paula Gosling, author of the Jack Stryker mystery series).

The Clock Strikes Twelve: A wealthy British family convenes in their manor house for New Year’s Eve. But when their industrialist patriarch dies, it’s up to prim Miss Silver to determine who rang in the new year with murder . . .

The Key: A German Jewish scientist working for the British war effort is murdered, and his new formula has been stolen. Now Miss Silver must find the killer or risk an explosive disaster . . .

She Came Back: Three years after everyone thought she died in France, Lady Anne Jocelyn returns to England. The lady may be who she claims to be, or perhaps she’s a fraud—or even a Nazi spy. Only Miss Silver will be able to divine the truth.