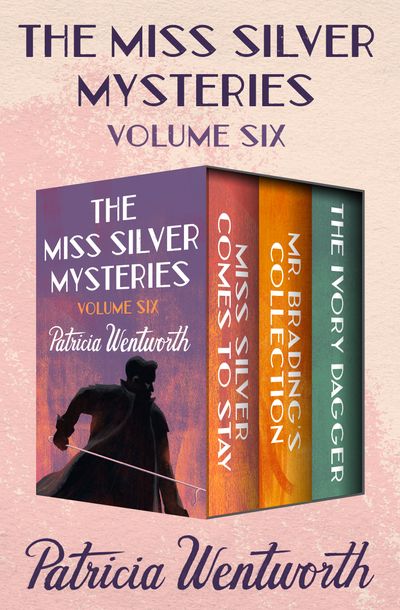 Retired governess Maud Silver is about as unlikely a sleuth that Scotland Yard has ever seen—but her unassuming manner only helps her unravel their most mystifying cases in “some of the best examples of the British country-house murder mystery” (Alfred Hitchcock’s Mystery Magazine).

Miss Silver Comes to Stay: While visiting an old school chum in the rustic town of Melling, Miss Silver soon finds that its bucolic charm hides undercurrents of murderous vengeance. When Melling’s prodigal son returns with a lot of money and a long-held grudge against the town, he intends to sell his manor house and be done with Melling forever. But this cozy English hamlet isn’t finished with him . . . and it may be about to finish him off.

Mr. Brading’s Collection: Jewel collector Lewis Brading leaves little to chance, housing his gems in a concrete annex protected by the latest security system and his own watchful eye. But he still suspects something might be wrong. He consults Maud Silver, who tells him to send his collection to a museum as soon as possible. Ignoring her advice may be the last mistake Brading ever makes . . .

The Ivory Dagger: Bill Waring had a promising career and the love of a young beauty—until a freak train accident puts him in the hospital for a month. When he gets out, he is stunned to learn that his beloved has become engaged to another. Determined to win her back, Bill follows her and her charmless new fiancé on a weekend in the country. When her new betrothed is stabbed to death, blame falls squarely on Bill—and only the brilliant, demure Maud Silver can clear his name.

These charming British mysteries featuring the unstoppable Miss Silver—whose stout figure, fondness for Tennyson, and passion for knitting belie a keen intellect and a knack for cracking even the toughest cases—are sure to delight readers of Agatha Christie, Ellis Peters, and Dorothy L. Sayers.