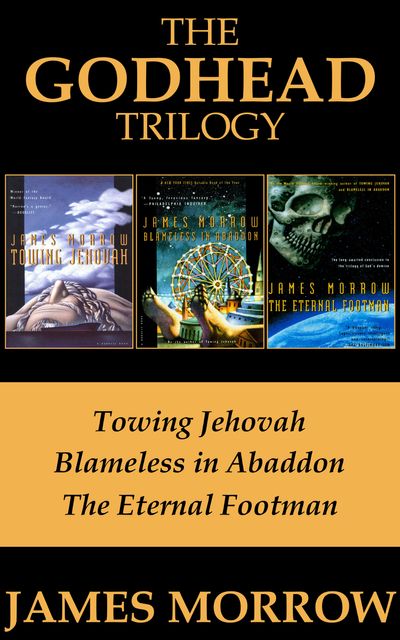 Published by Houghton Mifflin Harcourt
The award-winning, irreverent, and darkly funny trilogy from “the most provocative satiric voice in science fiction” (The Washington Post).

The complete Godhead Trilogy from James Morrow, including Towing Jehovah, Blameless in Abaddon, and The Eternal Footman.

In the World Fantasy Award–winning Towing Jehovah, God has died, and Anthony Van Horne must tow the corpse to the Arctic (to preserve Him from sharks and decomposition). En route Van Horne must also contend with ecological guilt, a militant girlfriend, sabotage both natural and spiritual, and greedy hucksters of oil, condoms, and doubtful ideas.

Blameless in Abaddon, a New York Times Notable Book of the Year, is a “funny, ferocious fantasy” (Philadelphia Inquirer). God is a comatose, two-mile-long tourist attraction at a Florida theme park—until a conniving judge decides to put Him on trial in The Hague for crimes against humanity.

The Eternal Footman completes Morrow’s darkly comic trilogy about God’s untimely demise. With God’s skull in orbit, competing with the moon, a plague of “death awareness” spreads across the Western hemisphere. As the United States sinks into apocalypse, two people fight to preserve life and sanity. A few highlights: a bloody battle on a New Jersey golf course between Jews and anti-Semites; a theater troupe’s stirring dramatization of the Gilgamesh epic; and a debate between Martin Luther and Erasmus. Morrow also gives us his most chilling villain ever: Dr. Adrian Lucido, founder of a new pagan church in Mexico and inventor of a cure worse than any disease.