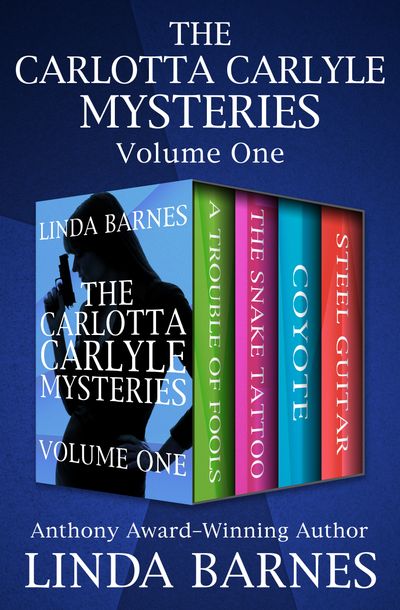 The Carlotta Carlyle Mysteries Volume One

Published by Open Road Media
As a former Boston cop, Carlotta Carlyle thought she had seen it all—but that was before she became a private eye . . .

A Trouble of Fools: Recently fired from the Beantown police force for insubordination, the part-time taxi driver lands her first case as a private eye. Searching for a missing Irish cabbie leads her into a nefarious scheme that puts her at odds with the FBI and a Mafia-connected former lover, in this award-winning debut.

The Snake Tattoo: A London Times outstanding book of the year, Carlotta Carlyle’s former boss, Lieutenant Mooney, gets into a scrap with a stranger in a bar. When the stranger winds up comatose, Mooney is suspended, and he needs Carlotta to find the one woman who can exonerate him: a blond hooker with a snake tattoo.

Coyote: An illegal immigrant is mistakenly pronounced dead when her ID card is found on the body of a murdered woman near Fenway Park. Now she needs Carlotta to get her ID—and her life—back. But this wasn’t an isolated crime. A murderer is targeting Boston’s immigrant community . . . and could easily add Carlotta to the kill list.

Steel Guitar: Carlotta is shocked to see blues superstar Dee Willis climb into her cab. They were friends in college—until Dee ran off with Carlotta’s husband. Now, Dee’s in town playing a concert and wants Carlotta’s help tracking down a mutual friend. But when a blackmail plot is uncovered and a corpse is found in Dee’s hotel room, Carlotta will have to work fast to keep Dee from becoming another casualty of the blues.