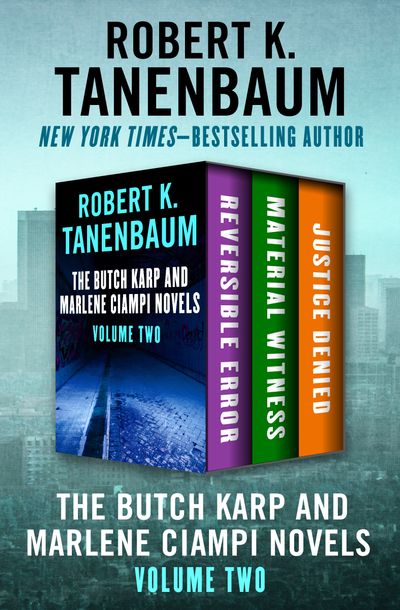 A successful trial lawyer and “one hell of a writer,” Robert K. Tanenbaum crafts his legal thrillers with authenticity and breath-taking suspense. Here are three books in his series featuring Manhattan assistant district attorney Roger “Butch” Karp, who struggles against an often-corrupt judicial system. But with the help of Marlene Ciampi, he fights the good fight with energy, wit, and a passion for the truth (New York Post).

Reversible Error: When a group of politicians back his bid for Manhattan’s district attorney, Butch soon realizes that his benefactors have their own sinister motives . . .

“Sizzles and explodes . . . a gut-wrencher that takes Tanenbaum to the summit!” —Booklist

Material Witness: When a star basketball player is found murdered with a huge stash of cocaine, Butch must go undercover to stop a conspiracy of drugs, gambling, and murder . . .

Justice Denied: After a Turkish diplomat is gunned down in the street, Butch and Marlene are caught in a deadly web of corruption more sinister than even he could have imagined . . .