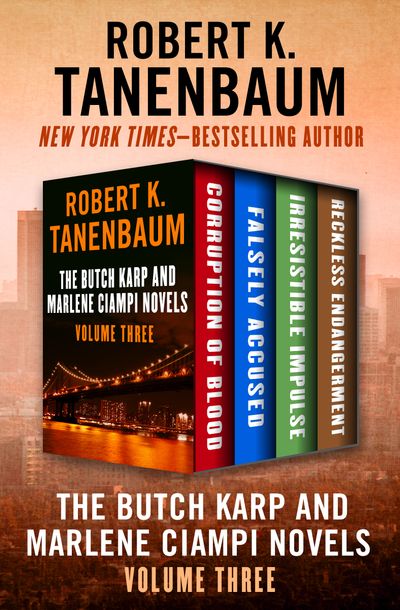 Published by Open Road Media
Four razor-sharp thrillers in the long-running series from a New York Times–bestselling author—and “one hell of a writer” (New York Post).

Proclaimed the “Joseph Wambaugh of the judicial system” by the San Diego Tribune, trial lawyer Robert K. Tanenbaum crafts his legal thrillers with authenticity and breath-taking suspense. In these four entries in the series, Manhattan assistant district attorney Roger “Butch” Karp and Marlene Ciampi fight the good fight against crime and an often-corrupt judicial system with energy, wit, and a passion for the truth (New York Post).

Corruption of Blood: Butch has just found evidence that could prove who really killed JFK, and he’s about to find out that the conspiracy behind the assassination is still alive—and still deadly . . .

“[His] most enthralling legal thriller to date.” —Vincent Bugliosi

Falsely Accused: When New York’s chief medical examiner is wrongly fired, he goes to Karp for justice—only for Butch to discover corruption far deadlier than he’s ever seen . . .

Irresistible Impulse: A racially charged murder pits Butch against a flashy defense lawyer in a case so divisive it could drive the city to tear itself apart . . .

Reckless Endangerment: Drug kingpins are being murdered all over Manhattan, and Butch must help the police find a vigilante who has more in mind than justice . . .

“A three-ring circus of mayhem and mystery.” —Publishers Weekly