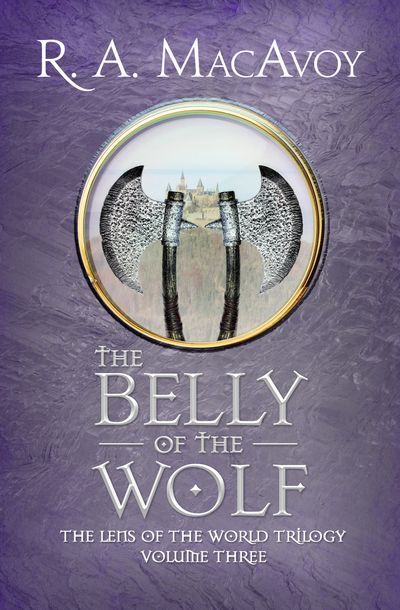 The Belly of the Wolf

Published by Open Road Media
The award-winning author of Lens of the World “concludes what may be one of the best fantasy series of the decade” with her now elderly hero Nazhuret (Publishers Weekly).

Nazhuret, the reluctant philosopher-hero of R. A. MacAvoy’s award-winning bestseller Lens of the World, is embarking on his final adventure. He must unwillingly end a long period of exile and once again take up the sword in defense of freedom. His old friend the King is suddenly and unexpectedly assassinated, leaving the kingdom in chaos. Nazhuret interrupts the peace of his old age to endure the horrors of war and the supernatural realm of the dead. Before his journey comes to an end, he must test his wisdom to its limit in the face of danger and treachery. He is accompanied by his beloved daughter Nahvah and, as Nazhuret’s final debt of honor is paid, he faces the darker side of human nature with both of their lives at stake.

“A moving and fascinating culmination to the life of the hero we have watched mature . . . As in the past, Nazhuret takes readers on an exhilarating journey.”—School Library Journal

“The conclusion to the trilogy,Lens of the World, is as effective and unusual as its predecessors. . . . MacAvoy’s sense of place, exquisite prose, and first-person narration remain exceptional. She remains, albeit without any fanfare, in the top rank of the American fantasists' roster.” —Booklist

“Quiet, unpretentious, vivid, understated, succinct: an object lesson for other, more verbose fantasists in how to produce more from less, and how to write an appealing and gratifying trilogy by offering a self-contained story each time out.” —Kirkus Reviews