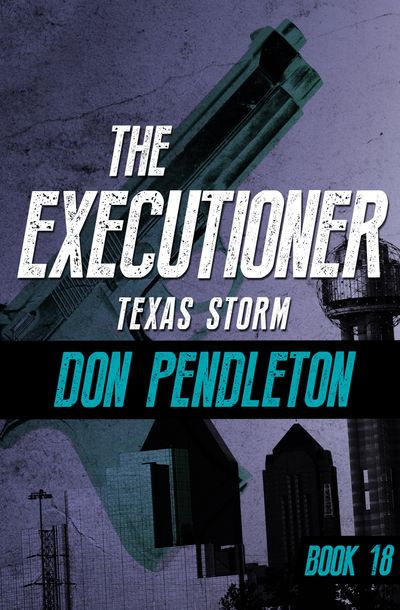 Published by Open Road Media
In the oil fields of Texas, the Executioner discovers a daring Mafia plot

The plane comes in low, dropping its sole passenger on the edge of the oilfield known as Klingman’s Wells. Wearing all black, his chest crisscrossed with ammunition, Mack Bolan begins his assault on the facility. With his two favorite pistols and a handful of grenades, he cripples this mob-run drilling site, causing enough chaos to allow him to escape unharmed—and rescue the kidnapped woman who is trapped inside.

Bolan’s one-man war against organized crime has hamstrung the mob’s gambling operations and stopped its corruption of Washington. Desperate for funds, the syndicate has infiltrated the Texas oil industry, starting with Klingman’s Wells. To save the Lone Star State from mob rule, the Executioner hits one Mafia stronghold after another in a tornado of destruction that is appropriately Texas size.

Texas Storm is the 18th book in the Executioner series, but you may enjoy reading the series in any order.