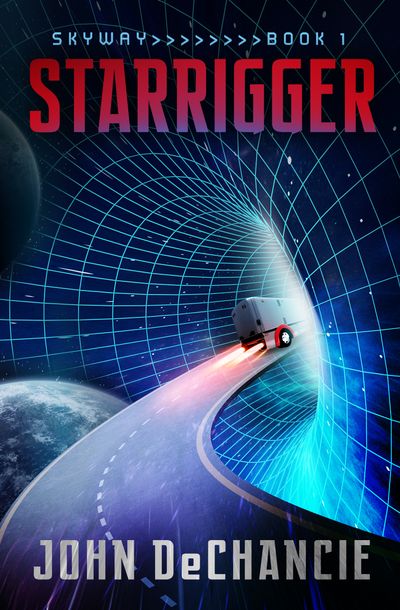 Independent space trucker Jake McGraw, accompanied by his father, Sam, who inhabits the body of the truck itself, his “starrig,” picks up a beautiful hitchhiker, Darla, and a trailer-load of trouble. One of the best of the indies, Jake knows a few tricks about following the Skyway, which connects dozens, or maybe hundreds, of planets—nobody knows how many and nobody really knows the full extent of the Skyway, and much of it remains unexplored. But somehow, a rumor gets started that Jake has a map for the whole thing, and suddenly everybody wants a piece of him: an alien race called the Reticulans; the human government known as the Colonial Assembly; and a nasty piece of work called Corey Wilkes, head of the wildcat trucker union TATOO. No matter what Jake does, no matter how many twists and turns he makes, he cannot shake any of the menaces on his tail. The Starrigger series continues with Red Limit Freeway and concludes with Paradox Alley. Starrigger was a nominee for the Locus Award for Best First Novel in 1984.